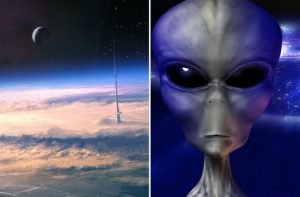 Chief Cabinet Secretary Nobutaka Machimura caused quite a stir with his bold statement that “UFOs definitely exist.” In subsequent clarifications, the government claimed that there have been no confirmed sightings, but if a UFO was to appear, “fighter jets would be scrambled to attempt visual confirmation.”

While it could be that Machimura was joking, it’s also possible he was attempting to pave the way for belief in the existence of alien life — at present a taboo — to become an issue of public debate. For some prominent thinkers that day can’t come soon enough.

Alfred Lambremont Webre, a Yale graduate, Fulbright scholar, lawyer, and judge on the Kuala Lumpur War Crimes Tribunal, has spoken before the Diet on U.N. treaty issues. He is also the director of the Institute for Cooperation in Space. He helped found, and has written extensively about, an emerging field of discourse known as exopolitics.

Webre is on a mission to educate the world about the greatest news story in history: Humans not only share the universe with intelligent life but these extraterrestrial species are about to make their presence known. And that’s just the tip of the iceberg.

“Earth is an object of interest to a larger universal society,” Webre explained in an interview. “The science-based approach of exopolitics shows that they have been showing themselves on the periphery because humanity has not been ready for the shock of revising their knowledge of reality.”

While Webre’s belief in the existence of extraterrestrial life is based on documents and testimonies he has amassed, Shigeru Osawa claims his knowledge of ETs came straight from the horse’s mouth. Osawa — a pseudonym — founded the Future Earth Research Institute (FERI) in Japan and is working, like Webre, to enlighten humanity about unknown sources of energy.

Osawa, who gives talks throughout Japan about the dynamics of vortex “ki” energy and the future of Earth, says he acquired his knowledge directly from alien civilizations.

“There are one trillion stars in our galaxy,” Osawa expounded. “Each has a solar system, with eight to 10 planets circulating, like ours.

“Around most of those 1 trillion stars there are planets with life. Among them, there are 500 million with higher intelligent life, like monkeys. Among those, 80 million have language ability, and among those, 6,800 have technology to travel in space.

“An alien race known as Betelgeuse, which hails from the top-left alpha star within the Orion constellation, created a space federation by conquering various planets. They’re highly advanced in space technology though not very spiritually evolved.

“Before them the prevailing civilization was from Pleiades; they were gentle and created the civilization of Atlantis on Earth 400,000 years ago. But the Pleiadeans were chased away by powerful forces from Alinilam, who later were conquered by Betelgeuse about 40,000 years ago. It’s been like ‘Star Wars.’ “

The source of Osawa’s knowledge is out of this world.

“At first I channeled; now I can communicate directly whenever I like. I ask questions, and they answer ‘yes’ or ‘no.’

“I gained ‘satori’ (enlightenment) when I was 34. Aliens often implant ‘kon’ — like a computer program — in earthlings, usually during childhood, so we (those with kon implants) are half-aliens. We four were implanted,” Osawa stated, indicating the three other members of FERI.

Osawa, who used to be a master of the “I Ching,” the Chinese ancient book of divination, made his statements matter-of-factly, with no hint of irony, but sometimes with a touch of humor. He seemed to be amusing and surprising himself as he explained the teachings he receives. At one point during our interview he plunged into prayer, quietly chanting, with hands circulating as if to form a ball — or a world.

FERI member Sachiko Suzuki — who like her fellow implanted colleagues chose to use an assumed name — is a healer and psychic who presently lives up a mountain on Shikoku. Her close encounters of the third kind started at her parents’ 14th-floor apartment in Osaka.

“I first traveled to alien worlds when I was 18. Before I knew what was happening, I found myself inside a flying saucer.

“I had fallen asleep, but then I woke up in dark space. I was floating, looking out through a window pane. Somebody was talking to me telepathically. He was an older male, speaking Japanese. He told me, ‘I will show you how stars die.’

“He told me to look straight ahead, where I saw a blue star, round, the size of a ball. There was a dark point in the center, and it started blowing up. The blackness then covered everything. Only a blue ring was left. The ring then flew away and disappeared.

“It dissolved into the darkness. That was my first trip.”

FERI member Yoshimitsu Kunitsune has also traveled to alien worlds after falling into a trance-like state. Unlike Suzuki, however, he has never seen a UFO.

While the claims of Future Earth Research Institute founder Osawa are somewhat fantastical, the stories of contact with extraterrestrials told by other Japanese have been more down to earth, as it were. The testimony of 1986 JAL pilot Captain Kenju Terauchi is often cited by UFO enthusiasts.

While flying over Alaska, Terauchi and his copilot spotted what appeared to be aircraft lights. After performing some cat-and-mouse maneuvers (as if the source of the lights was playing with the JAL craft, says Terauchi), light poured into the cockpit, warming Terauchi’s face.

Later Terauchi saw “a silhouette of a gigantic spaceship” and thought, “We’ve gotta get out of here quickly!”

After that they saw the UFO ascending, leaving the pilots to wonder — and fear — what the craft’s purpose could be.

UFO enthusiasts claim this craft was caught on radar, and that the official Federal Aviation Administration transcripts of the exchanges between Terauchi and ground control have been preserved. They also say Terauchi was grounded and given a desk job for speaking out in public about his encounter.

Brushes with authority and government — most often with “men in black” from super-secret departments in the U.S. military seeking to suppress eyewitness testimony and evidence — are common to many accounts of the aftermath of alien encounters.

The Disclosure Project, started by ex-physician Steven Greer, consists of some 400 individuals, most U.S. government civil-servant whistle-blowers, who claim to have direct evidence of UFOs or of clandestine government programs that suppress UFO information.

Webre is one of over 100 former high-level governmental and military Disclosure Project witnesses. These individuals claim that a person who speaks out about UFOs may have their livelihoods — or even their lives — threatened.

Webre notes that reporter Angelia Joiner, who covered the world’s most recent UFO sighting in Stephenville, Texas, on Feb. 12, has been fired from her job at the town’s local newspaper, the Empire-Tribune, after being told to back off from the story. Webre believes she paid the price for bringing to light a series of eyewitness accounts of UFO sightings.

Osawa and the other FERI members declined to have their photos taken, citing security concerns and previous encounters with “men in black” and helicopters.

Although they gamely answered questions about UFOs for this article, FERI’s main concern is introducing earthlings to revolutionary teachings known to alien civilizations about space and energy that they say could have massive implications for humanity. Like Webre, FERI members claim that perfectly clean and sustainable energy forms are available that can literally take humans deep into the cosmos.

For those looking for a happy ending, however, don’t turn to Osawa.

“Humans will go through various challenges, especially in 2012 and 2013. It’s clear to the gods that humans cannot overthrow their corrupt governments, so they will have to remove all powers from the Earth by way of natural catastrophes like earthquakes and epidemics. Economies will collapse. Civilizations will face fatal crises.

“To assist humans in coping with those dire situations, four mother ships will land on Earth: one in Calgary, another in California, one in Nagano Prefecture, and the final one in eastern Australia. Then more alien saucers will land in other parts of the world.”

“We are not on the edge of an extinction-level event. Exopolitics shows that humanity is on the threshold of a new era of promise and positive evolution, not doom and destruction.”