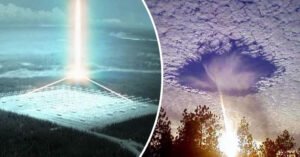 In an Arctic compound 450 kilometers east of Anchorage, Alaska, the Pentagon has erected a powerful transmitter designed to beam more than a gigawatt of energy into the upper reaches of the atmosphere.

Why irradiate the charged particles of the ionosphere (which when energized by natural processes make up the lovely and famous phenomenon known as the Northern Lights)?

According to the US Navy and Air Force, co-sponsors of the project, “to observe the complex natural variations of Alaska’s ionosphere.”

As well, admit the Pentagon, to develop new forms of communications and surveillance technologies to enable the military to send signals to nuclear submarines and to peer deep underground.

Ever since the existence of HAARP became public, a number of independent researchers have warned the operation has a secret agenda including: 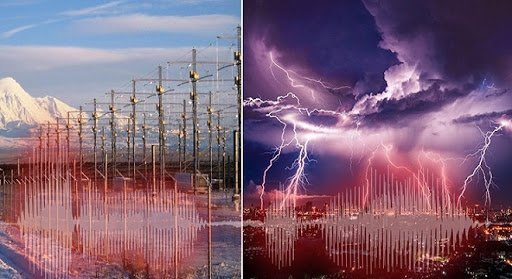 HAARP transmissions may also be used for the detection and monitoring of electromagnetic or “plasma” phenomena, precursors of seismic activity and tectonic movement.

Researchers believe HAARP transmissions are actually being used to activate or trigger exactly the same electromagnetic conditions that can cause tectonic movement.

As anti-HAARP activists claim, HAARP is the most dangerous project that the US government has undertaken so far. Hidden by the innocent name of HAARP is the ultimate death ray.

When HAARP’s shot up, it can move clouds. When aimed at the ground it can cause earthquakes and tsunamis. According to Jerry Smith, an anti-HAARP activist says that the US military’s desire is to harness the weather and use it as a weapon.

Smith in his book HAARP – The Ultimate Weapon of the Conspiracy, warns many atmospheric scientists working on the secretive military project might be unaware of HAARP’s grave potential to wreak havoc on the Earth.

“If HAARP is a TMT [Tesla Magnifying Transmitter], and these researchers correctly understand Tesla’s work, we could be in a lot of trouble. It is quite possible that the scientists working on HAARP do not know what they are playing with.

“Beyond that their ignorance might be compounded if HAARP is indeed a secretive black-ops military project. The military has devised a way of keeping secrets called ‘compartmentalization’ where each unit knows only what it needs to know… Only the control group knows what’s going on…”

“If there is a control group familiar with TMTs directing the actions of scientists unschooled in Tesla technology, those lower level operatives could be directed to wreak havoc with created weather or manufactured earthquakes…

The key technology behind HAARP is the brainchild of scientist Bernard Eastlund.

Judging from his APTI patent, Tesla was a major inspiration for Eastlund’s ionospheric heater. A New York Times story, dated December 8, 1915, describes one of Tesla’s ideas which are remarkably similar to Eastlund’s.

He published papers on the use of environmental-control technologies for military purposes. MacDonald made a revealing comment:

“The key to geophysical warfare is the identification of environmental instabilities to which the addition of a small amount of energy would release vastly greater amounts of energy.”

World-renowned scientist MacDonald developed ideas for using the environment as a weapon system and he contributed to what was, at the time, only in the wildest dream of a futurist.

When he wrote his chapter, “How to Wreck the Environment,” for the book Unless Peace Comes, he was not kidding around. In it he describes the use of,

He speculated these types of weapons would be developed and, when used, would be virtually undetectable by their victims.

Is HAARP one such weapon?

“have the ability to transmit explosive and other effects such as earthquake induction across intercontinental distances to any selected target site on the globe with force levels equivalent to major nuclear explosions.”

Her book explains that pulsed, extremely low frequency (ELF) waves can be used to convey mechanical effects and vibrations at great distances through the Earth.

Such manipulation of the Earth, she states, “has the capability to cause disturbance of volcanoes and tectonic plates, which in turn, have an effect on the weather,” creating storms and torrential rains over an area.

Does anyone notice the world’s weather has been very strange in the last years? Can we be sure that the climate is changing due to the activities of people, and not because of such devices as HAARP?

Bohemian Grove: Secret Place For The Richest And Most Powerful

Killed by Masons: The Disappearance of William Morgan