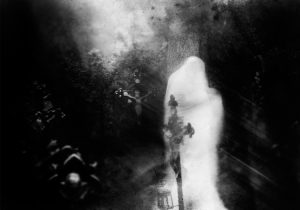 Although these phantoms are called grey, they have been seen in clothes of various colors, black and white. Spectral lovers sometimes accompany those who died for love.

Most sightings of Grey Ladies who died for love are in England; however reports are universal. The majority of these specters are said to haunt a place because of their passionate desire to be reunited with their loved one or because of unrequited love.

Others are seen at the scene of their tragedy which is usually suicide. The ones who are death omens are usually called White Ladies and are attached to a family.

The ghost that haunts the fifteenth century manor house is believed to be that of Elizabeth Hesketh. Shortly after her marriage, her husband was called to war. She became very ill and vowed that she wouldn’t die without saying goodbye to him.

She died before he returned. Her ghost has been sighted many times, usually by the main entrance or on the drive leading to the hall.

Catholic Sir John Southworth had a daughter, Dorothy, who fell in love with a wealthy Protestant nobleman. This outraged John who denounced their union and forbade the knight to see his daughter.

The couple continued to meet and made plans to elope in hopes that John would eventually forgive them. One of Dorothy’s brothers who had been spying on the couple was hiding and overheard their plans.

On the night the couple met, the brother killed the nobleman and his two friends who were helping the couple. Their bodies were secretly buried in the hall’s chapel and Dorothy was exiled to a convent where she became insane. She died shortly thereafter.

Her ghost has been seen walking on the grounds, meeting, then embracing her lover. Some witnesses have reported hearing soft wailing and crying.

The Hall was the ancestral home of the Norris family. The haunter is believed to be the specter of Mary Norris. She married Lord Sidney Beauclerk, a roué who gambled away all they owned. When she learned about this, she went insane.

It’s unclear whether she threw their baby into the moat that surrounded the mansion, then committed suicide or that she jumped into the moat holding the baby. Her ghost has been seen in the Tapestry Room and in her bedroom.

The specter foretells disaster or death for the royal dynasty of the Austro/Hungarian Empire. The origin of the White Lady is unknown. Empress Maria Theresa and others saw her at Schonbrunn Palace on April 5, 1807. Maria Theresa died eight days later.

Emperor Francis saw her twice, before the deaths of his wife and his father. Empress Elizabeth saw her twice during the same day. Within a week after the empress saw the specter, she was killed by anarchist Luigi Luccheni.

What are Grey Ladies?

Most of these ghosts are hauntings. A haunting has no intelligence and is energy imprinted in time and space, like a videotape. These specters reenact the scene or scenes repeatedly and do not react to witnesses’ presence.

Grey ladies can appear on the anniversary of their deaths, at certain times, such as during a full moon or a stormy night, or intermittently. Grey ladies who are death omens may appear to the one who is about to die.