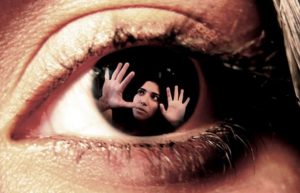 According to Greek custom, every single person has the power of the evil eye, but not everyone knows it. The evil eye is described as negative power everyone carries.

The healer will make the sign of the cross on the victim’s face and hands using the oil and holy water, while reciting a secret, silent prayer.

The prayer is only ever revealed in special circumstances, because those who utter it without discretion will loose the power to cast out the evil eye. It is said that if the evil is indeed present, both the healer and the victim will find themselves yawning.

After making the sign of the cross a further three times the healer spits into the air three times and the evil eye is vanquished.

The Greek Orthodox faith accepts the cultural belief in the evil eye, but prefers to attribute its cause to the Devil, or the very human emotions of admiration (lust or pride) or envy.

The Church believes the evil eye is harmful to both the one casting the spell and the one receiving it, and invokes an ancient prayer to heal both parties.

The Church encourages people who believe they’ve received the evil eye to seek help from their faith, claiming prayers from God are the most effective way of breaking the spell.

The most popular form of protection against the evil eye is a charm. Coloured blue – the colour to ward off the evil eye – it is painted with an “eye” that supposedly reflects the evil.

These charms are available in a variety of forms, from personal jewellery to different sized and shaped pieces to hang inside cars or on walls. Some people cement evil eye charms into their driveways.

Although the Greek Orthodox Church states the only form of protection is a crucifix or a religious icon from a church or monastery, the evil eye charm is very popular and visible all over Greece.

Other Forms of Protection

Blue stones are also said to be effective against the evil eye. Garlic will also negate the effect of the evil eye, especially if a single clove grows into the shape of a small head of garlic.

This clove does, however, need to be carried at all times, which is not always easy and practical. This probably accounts for the popularity of the charm to ward off the power of the evil eye.

When receiving an extravagant compliment it is advisable to whisper “skorda” (the Greek word for “garlic”) immediately after accepting the praise. This should reduce the risk of attracting the evil eye.

It’s also said one should spit three times while saying “skorda”, before asking the one paying the compliment to do the same.

This strange practice could be deemed unsociable and unhygienic, so it is comforting to know the general consensus seems to be that the word “skorda” alone offers sufficient protection.

What is the “Third Eye” and Do You Have One?