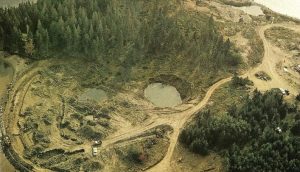 The Oak Island Money Pit has been the fascination of aspiring treasure hunters for more than 200 years. This mysterious site is located in an area on the eastern part of Oak Island, a heavily wooded 140-acre tract of land just off the coast of Nova Scotia.

The “Money Pit” itself has been visually described as a sinkhole, but according to dozens of various legends, it hides a robust treasure worth millions, and potentially billions, of dollars.

An extensive array of explorers–including such famous figures as Errol Flynn, John Wayne, and Franklin Delano Roosevelt–have all tried their hand at “cracking the code” to potentially unlock the vast stores of treasure allegedly buried beneath this seemingly bottomless pit, but so far no gold has been discovered.

Every time a new level of depth has been achieved by hopeful explorers, the shaft floods with water due to an intricate series of tunnels that make the pit appear to be booby-trapped to some degree.

Over the past 200 years, millions of dollars and countless man-hours have been invested into various explorations of the Money Pit, claiming the fortunes–and in some cases, the very lives–of hopeful treasure hunters.

At last count, six people have met their fate while excavating the Money Pit, and hundreds more have tried but failed to hit paydirt, returning home empty-handed. 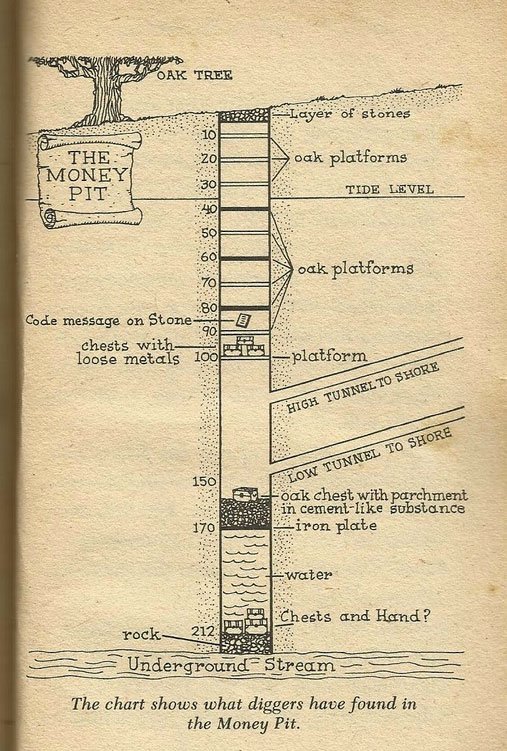 Perhaps the most shocking aspect of this whole phenomenon is that no one actually knows what the pit contains, if it contains anything at all.

Rumors regarding what type of treasure may be buried in the Money Pit have run the gamut of some of the world’s most infamous lost treasures, including Marie Antoinette’s crown jewels, Peruvian treasures from the Inca civilization, manuscripts that reportedly prove that Shakespeare’s works were actually authored by Francis Bacon, and the ever-elusive cache of treasures accumulated by the Knights Templar.

One of the most popular theories is that the Money Pit contains the treasure hoard of Captain William Kidd, the infamous 17th century Scottish pirate. Both Kidd and Blackbeard (Edward Teach) were rumored to have made deathbed confessions regarding buried treasure, but no evidence exists to suggest that either one of them ever visited Nova Scotia.

So how did the whole mystery of Oak Island originate? It all started in the summer of 1795 when a teenaged boy named Daniel McGinnis decided to venture out to Oak Island by rowboat and explore its forests.

Not too far inland, McGinnis began to traverse through the thick forest when all of a sudden he reached a clearing that featured a handful of rotten tree stumps and a rather large oak tree.

One particular branch of the tree showed signs of rope burn, and hanging from the tree was a tackle block. Directly beneath this branch, McGinnis noticed what appeared to be a depressed circle in the ground.

Since legends and rumors of buried pirate treasure were rampant in that day, McGinnis speculated that he may have come upon a secret cache of treasures, and quite possibly the long lost hoard of Captain Kidd himself!

The next day, McGinnis returned to the spot along with two of his friends, John Smith and Anthony Vaughan, both of whom aided McGinnis in digging. After about two feet worth of digging, they discovered a neatly laid floor of flagstone, which they eagerly pulled up to see what may be underneath.

The trio then discovered that they were digging in what appeared to be a man-made shaft of unknown depth. It was clear that the shaft itself had been refilled with loose dirt, and they noticed scores of pickaxe marks in the walls. Once they dug about 10 more feet, they encountered a platform constructed of rotten logs, which they quickly ripped up to continue digging.

Around the 20-foot mark, another platform appeared, and then another one at 30 feet. At this point, it seemed as if there was no end in sight, so they boys abandoned their expedition, carefully covered the hole, and headed back home.

Although their first treasure hunting exploration may have seemed like a bust, they had every intention of returning, and eventually McGinnis and Smith both bought land on Oak Island in hopes of laying claim to the extravagant treasure that they were certain was at the bottom of the pit.

Fast-forward to 1803, when McGinnis and his friends managed to solicit the financial backing of a wealthy man named Simeon Lynds. He was intrigued by the story, and subsequently furnished the three young men with a crew of workers and supplies in order to begin a more sophisticated excavation. 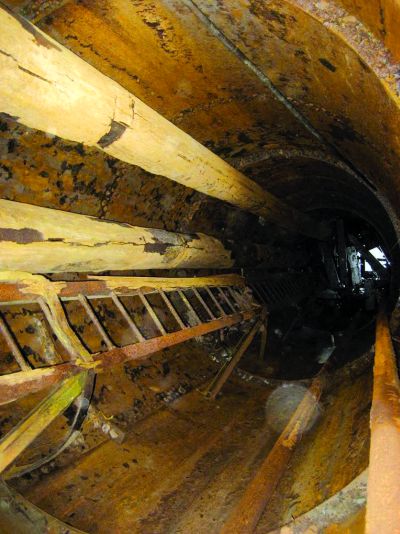 The crew struck yet another log platform at 40 feet, and they also encountered layers of odd materials such as charcoal, putty and coconut fiber, which was exceptionally strange considering the fact that the nearest coconut tree was some 1,000 miles away.

They continued to encounter platforms at regular intervals, with little to show for it other than a few odds and ends that seemed to add further confusion to the mystery.

At 90 feet, the crew made an exciting discovery–a flat stone with strange inscriptions. The inscriptions were eventually deciphered, and were rumored to indicate that there were “two million pounds” of treasure buried “at forty feet below.”

This stone has since been lost, and to this day the actual meaning of the inscription has been hotly debated. Once the digging reached 98 feet, another hard surface was struck, prompting much excitement, but water began seeping into the shaft as well.

The crew decided to retire since the night was approaching, and they eagerly made plans for who would get what portion of the treasure if they were to discover it the following day.

Unfortunately, things didn’t quite play out like the crew had planned. They woke up to find the shaft filled with nearly 60 feet of seawater, which was strange in light of the fact that the shore was some 500 feet away.

This first failed attempt marked a series of fruitless explorations conducted by dozens of different groups over the next several decades. Every engineering and construction technique imaginable was employed in order to somehow circumvent the repeated flooding of the shaft, none of which were successful.

Crew after crew drilled, bored, pumped, dug, blasted, trenched, and essentially cratered the pit, rendering it nearly unrecognizable compared to its original state. Dams were constructed to prevent the flooding of water, and parallel shafts were dug to hopefully obtain a successful point of entry into the original shaft, but to no avail.

At the end of it all, no one had anything to show for it except frustration and soggy equipment. The only thing that kept most crews coming back was the occasional discovery of some strange relic; for example, at 155 feet a small parchment made of sheepskin was discovered with the letters “VI” (or possibly “UI”) inscribed on it. Layers of other materials such as metal shards and more oak were found at varying depths.

An interesting discovery took place during one excavation in the mid-1800s. A worker was taking a break at Smith’s Cove, a tiny cove roughly 500 feet away from the site of the Money Pit. He noticed that when the tide would ebb, water would seem to “gulch” forth from the coastline, much like “a sponge being squeezed.”

The crew promptly constructed a cofferdam around the area and carefully excavated the beach. Much to their astonishment, they discovered that the “beach” was in fact a decoy–it was actually an elaborate filtering and drainage system that was covered by layers of coconut fiber and eelgrass.

The drains were configured like the five fingers of a hand, with each drain tunnel leading to a singular point that was positioned opposite of the Money Pit. The workers surmised that the drains were employed as a “flood trap” in order to continually flood the pit with water, no doubt to discourage potential treasure seekers. 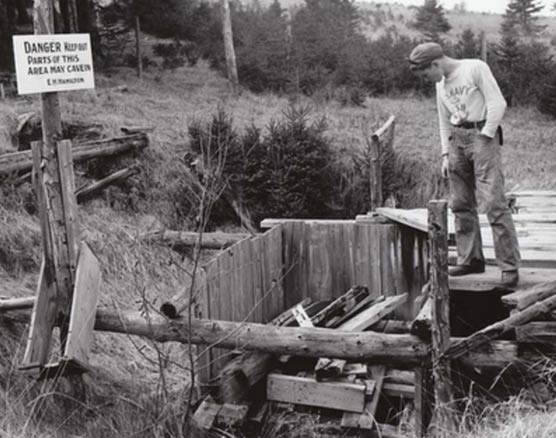 This discovery gave rise to a series of renewed efforts to solve the mystery of the Money Pit; after all, anyone willing to go to these types of lengths must be hiding something pretty valuable.

In 1898, a crew poured dye into the water of the Money Pit to see if they could determine its pattern of movement, and sure enough, the dye began to emerge from Smith’s Cove, further confirming the existence of a tunnel system.

However, things got a little more complicated when the dye was also discovered at the South Shore Cove, providing evidence of the existence of two tunnel systems. Even though these new discoveries seemed to hold exciting promise, the alleged treasure still proved to be elusive.

During the 20th Century, Oak Island would see several more expeditions, one famously spearheaded by a young Franklin Delano Roosevelt. FDR had a particular fascination with the story of the Oak Island treasure, visiting the island himself in 1909 (but coming up empty-handed) and loosely following the storied treasure hunt throughout the years of his presidency.

Other luminaries such as actors Errol Flynn and John Wayne both investigated and/or sponsored expeditions to the enigmatic site. Today, a substantial portion of the island is owned by Dan Blankenship, a contractor who moved from Miami to the South Shore of Nova Scotia in the 1960s to begin exploring the Oak Island Money Pit.

After several decades of diligent effort, Blankenship claims to have confirmed the exact location of the treasure, but he has not been able to secure enough resources and financial backing to continue the expensive excavation efforts.

Michigan-based brothers Marty and Rick Lagina have formed a business partnership with Blankenship, and after a few rounds of legal battles with the local government, they have received the necessary permits from the Minister of Natural Resources to continue excavating the site.

To this day, the alleged treasure of the Oak Island Money Pit has remained undiscovered. The most recent details of this captivating saga have been detailed in a History Channel reality series known as “The Curse of Oak Island.”

Whether the latest generation of explorers will be able to solve this enduring mystery is yet to be seen, but the lure of undiscovered riches will continue to inspire hopeful treasure seekers to give it their best effort.

Ghost Planes of the Peak District: The UK’s Own Bermuda Triangle