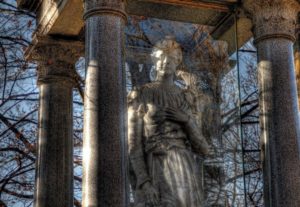 There are many stories and legends surrounding the “Lady in the Glass Case” memorial in Lake View Cemetery in Jamestown.

The truth is that Grace Laverne Galloway, Daughter of John and Sara Callahoun Galloway, was the only daughter of three children, and was born into a wealthy family.

Her father, John Galloway, had made his fortune in oil and they lived in a mansion that is now the Moose Club in Jamestown. Grace was a talented singer and she performed in a number of operas at the Chautauqua Institution in New York state.

She was given a chance to perform with the New York City Metropolitan Opera but was denied permission by her father who considered it an improper thing for a lady to do. 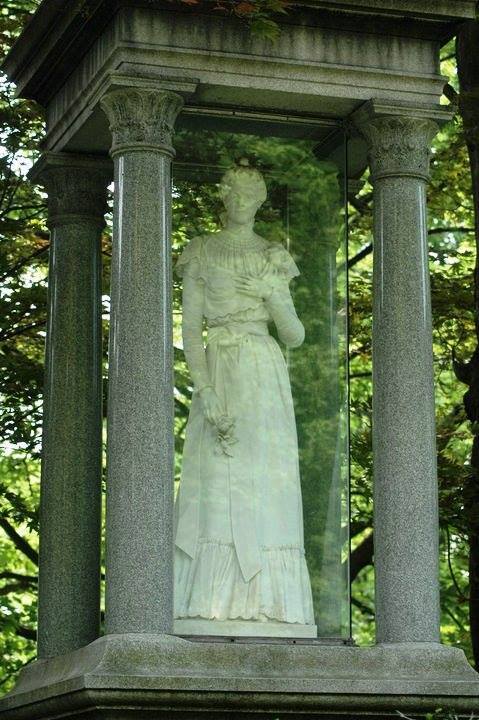 The exterior of her monument was completed by her father and grandfather. The life-size statue was designed by an artist in Pittsburgh, Pennsylvania and sculpted from marble in Florence, Italy.

The statue was modelled as a likeness to Grace, and wearing one of her “lawn outfits”, picked out at random. When it became evident that the statue would eventually be destroyed by the elements, it was encased in glass to protect it.

Among the many local legends about the “Lady Behind Glass” is that Grace Galloway is shown in her wedding dress and died of a broken heart. In actual fact, it is believed that Grace was never seriously involved with anyone prior to her death in 1898 at the age of 26.

In fact, she died, not from a broken heart, but from tuberculosis contracted during a stay in Boston.

Some embellish the tale with reports that she roams the cemetery on dark and foggy nights, crying for her lost love. The more creative version is that her body is encased within the statue itself.

For anyone wishing to see this remarkable tombstone, it is located in the Lake View cemetery in Jamestown, NY

Halloween: The Origin and Where Does It Come From?