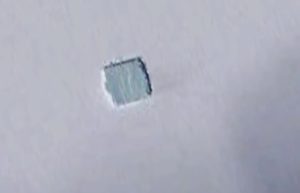 A Google Earth user believes he may have found a huge Antarctic building. A follower sent the sighting to youTube channel MrMBB333.

In the video uploaded yesterday, he zooms in on the area to find what seems like a giant square emerging from the ice.

“It is kind of offshore – maybe it is some sort of building but that is huge.”

Since being posted, his video has been seen more than 17,000 times.

Subscribers have had mixed reactions to what could be the mysterious structure.

“Could it be a huge monolith from an ancient civilization?”, one wrote.

Another added: “Nick’s square has an awesome shadow showing height.”

Antarctica is very often the subject of conspiracy theories, with so-called seekers of truth claiming that traces of everything from ancient civilizations to Nazi bases lie beneath the layer of snow and ice.