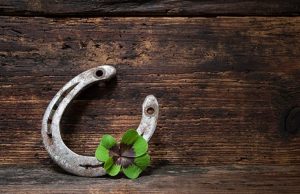 Superstitions pertaining to good luck are popular worldwide & date back thousands of years. This article examines some of these popular & obscure beliefs.

Since ancient times people have interpreted almost every occurrence as an omen for either good or bad luck. These ideas still exist today and originate from several sources, including cultural traditions, religious beliefs and even personal experiences, resulting in somebody creating their own superstitions.

According to famous skeptic, Michael Shermer, a reason why so many people still have such strong beliefs in superstitions may be due to the simplicity compared to complicated scientific explanations and the gratification they receive from following superstitions that they hope will reward them with good fortune.

These beneficial or good luck omens and superstitions are still very common worldwide and some of the popular and more obscure beliefs have been listed below.

According to ancient sailing superstitions albatrosses following a boat are the souls of the drowned. Seeing an albatross while sailing is considered good luck,. If they fly around the boat they maybe warning of an approaching storm. Killing an albatross will curse the killer for the rest of their life.

While usually considered a pest, a common ant superstition is that a person who finds an ant colony near the entrance to their house can expect riches and security. If a group of ants seem frenzied and are seen carrying their eggs to another location this may mean that they predict bad weather.

In many countries there is a superstition that killing ants brings on rain. A less well known superstition is that eating ant eggs in honey is an effective antidote to love.

According to legend when Adam and Eve where exiled from the Garden of Eden, Eve took a four-leaf clover with her to remind her of the happiness she had experienced in this utopia, associating the item with good luck and fortune.

The four leaves have been linked by Christians to represent the four parts of the cross Jesus was crucified on. Folklore also indicates another explanation why the four-leaf is considered lucky, as it resembles the prehistoric solar cross, which represented the four cardinal points (north, east, south and west) and became man’s first system of direction.

According to science writer David Bradley four-leaf clovers are considered quite a rare mutation, with only one in 10,000 clovers growing a fourth leaf.

A legend regarding this rare item is that the four leaves represent faith, hope, love and luck. There is also a rhyme that says the leaves symbolise fame, wealth, a faithful lover and health.

The belief that a horseshoe is a harbinger of good luck maybe due to the shape of the horseshoe itself. When turned on its side it can resemble the shape of the crescent moon, revered by moon worshippers and even the letter ‘C’ which some early Christians believed stood for ‘Christ’.

When held upwards the horseshoe creates a ‘U’ shape composed of a pair of horns that was variously used as a fertility symbol to attract good fortune and to repel evil.

Another reason may be because the horseshoe is made of iron, a metal that may have been considered magical since prehistoric times where man saw meteors seemingly fall from the heavens and provide them with meteoric iron.

It’s believed that horseshoes were first created by the Greeks in the 4th century to protect their horses which were also considered sacred. Until recently horseshoes had seven holes – a number that has always been widely considered as incredibly lucky, as the Old Testament says that God created the world in seven days and that to have seven children is lucky.

Other reasons include there being seven seas; seven planets in the ancient world; seven days of the week; seven virtues; seven deadly sins; and the ‘Seven Year Itch’ which is an ancient belief that life renews itself every seven years resulting in a person searching for new conquests.

As a rabbit is born with its eyes open, an ancient belief is that it can “see off” evil from its very first moments of life. As the animal is such a prolific breeder it was believed by many to represent prosperity and good luck.

One reason why luck was associated with a rabbit’s hind foot was that feet were considered phallic symbols and the rabbit’s foot may have been a fertility symbol due to the animal’s procreative behavior.

Hundreds of years ago people were also fearful of spirits dwelling underground and they noticed that rabbits managed to safely live and raise families there.

They also noticed that rabbits moved with their hind legs touching the ground before the front ones as well as burrowing into the ground and warning each of imminent danger with their hind feet. This all made people believe that this is where the rabbits luck was stored.

To really capitalize on the good luck offered by rabbits’ feet, legend says that the left hind foot needs to be severed from a rabbit killed during a full moon by a cross-eyed person.

A lucky rabbit’s foot may also have its ancestry in totemism which pre-dates Darwinism by hundreds of years and was founded on the belief that different tribes of man descended from different animals. Tribes would refrain from killing their ancestral animal, but were also known to use their body parts as amulets.

Today it should be noted that most lucky rabbits feet are the front feet, which are not associated with granting luck.

Ancient people believed that saliva was a product of the soul and that spitting was therefore an offering to the gods who in return would offer protection. In the Bible Jesus reportedly used spit in some of his miracles and some people believe that spitting on their pay or earnings after a business transaction will ensure more money in the future.

In history salt has been one of the most valuable and desired resources as it preserves and adds flavour to food. As a preservative salt is a natural enemy of anything that seeks to corrupt and destroy, such as the Devil.

The common belief that spilling salt is bad luck may be due to its value and scarcity in some areas as well as the idea that salt is sacred and incorruptible. Leonardo Da Vinci further popularised the superstition in his painting of The Last Supper, where Judas Iscariot is depicted knocking over a salt cellar with his elbow, before betraying Jesus to his death.

Spilling salt is supposed to be a warning that evil forces are approaching from a person’s left but they can be stopped in their tracks by throwing a pinch of salt over the left shoulder to either bribe or blind any advancing demons.

Some superstitious people carry salt with them to provide good luck and ensure that all their endeavours and dealings are successful. They may also offer a new born child a small quantity of salt with the belief that evil spirits are compelled to count every grain of salt before they harm the child and will either give up or never complete the task in time.

While spiders are commonly considered “creepy” and invoke feelings of fear and uneasiness, an English superstition is that spotting spiders and spider webs indicates wealth, even when finding a spider on your clothes or having one fall onto your face.

Small red spiders in particular are known as ‘money spiders’ and killing one is considered bad luck which can cause financial loss and even bring on rain.

There is also a legend that says Jesus, Joseph and Mary were hiding from Herold’s soldier’s in a cave, which the soldiers did not search as a spider had spun a web over the cave entrance making it look as if nobody had entered the cave for a long time.

An unusual belief is that human urine can ward off evil forces and washing your hands in the excrement is believed to offer protection from witches and the evil eye. An even stranger German superstition is that if a girl urinates in a man’s shoe he will fall madly in love with her.

In ancient bird-lore, roosters and hens were considered as particularly special animals as the rooster announced the coming of the day and hen’s clucking indicated the laying of an egg. Diviners and soothsayers believed that these animals were cable of revealing answers to man’s problems, and would kill these fowl to read their entrails and predict the future.

As early as 322BC the Etruscans on the Italian Peninsula used hens in divination and dried the furcula bone in the sun. Later two people would place wishes on the bone and break the wishbone in half. The person with the larger piece of bone would have their wish come true, possibly birthing the saying “to have a lucky break”.

The furcula bone may have been chosen as the wishbone as it resembles the groin, and therefore became a fertility symbol.