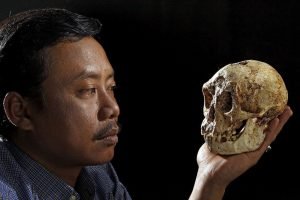 Archaeologists have confirmed one of the legends of Taiwan: the island was once inhabited by undersized dark-skinned people. Scientists note that traces of such peoples can be found everywhere – from Siberia to the British Isles.

From generation to generation in Taiwan, the legend of short people with dark skin was passed on. Its representatives lived high in the mountains, spoke in an incomprehensible language, and then strangely disappeared.

Until now, there has been no material evidence of the myth. In addition, scientists strongly doubted that black people could ever live on the island. Traditionally, the aborigines of Taiwan, the Austronesians, were thought to have come from China. They moved to new territories about five thousand years ago, and then settled throughout Oceania.

However, this year a joint expedition of archaeologists from Australia, Vietnam and Japan discovered an unusual female burial in the Xiaoma cave complex on the east coast of the island. The deceased was buried in a sitting position with her knees pressed tightly to her head – a method uncharacteristic for the region.

The results of radiocarbon analysis showed that the deceased was approximately six thousand years old. But much more scientists were surprised by its size.

“The length of the femurs was 35 centimeters. The skull was much smaller than usual. Based on these proportions, anthropologists came to the conclusion that the woman’s height did not exceed 140 centimeters ,” said expedition leader Mike Carson, professor at the University of Guam.

Archaeologists immediately decided that they were dealing with a representative of the legendary short people. Further studies of the remains convinced them of this even more.

“ DNA of the skull indicates that it is genetically similar to African specimens from around the same time period. And its size and shape are reminiscent of the pygmies who lived on the territory of modern South Africa ,” the study says.

Mike Carson’s team is confident that the woman from Xiaoma Cave belongs to the Negrito – the indigenous population of Asia, who came here from Africa.

Representatives of this group include many peoples in the Philippines, some natives of Australia and the Andamand Islands. All are distinguished by short stature (from 140 to 150 centimeters) and dark skin.

Now that the Taiwanese legend has been confirmed, scientists are faced with an equally important task – to find out why them disappeared from the island. So far, experts suggest that they were supplanted by the Austronesians who came later.