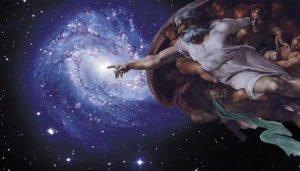 Renowned astrophysicist Stephen Hawking has stated that God is not necessary for our Universe to exist and that Heaven is a “fairy story.” As an Orthodox Christian physicist, I must disagree.

Science seeks, via physical observation, to discern the mechanisms governing the Natural world. Science cannot experiment outside of our Universe which constitutes the realm of metaphysics and religion.

By understanding these physical laws (e.g. quantum mechanics), we can better predict our Universe’s evolution in time and, so the reasoning goes, predict “simpler” events such as stock market crashes, global warming, and other nonlinear phenomena.

The Universe, in Hawking’s view, created itself out of nothing because Natural laws existed before the Big Bang and the Universe is merely obeying immutable laws that have somehow existed before, during, and after time. This is similar to a clock ticking without an outside operator (as long as its spring is wound i.e. has energy, who winds the clock is irrelevant in this vein of thinking).

In Hawking’s view, despite the infinitely possible values of electron charge, the speed of light, Planck’s constant, proton mass, etc. (which all couple with the four fundamental forces and which were “just right” to enable life to evolve), the Universe arrived in its’ present form as an accident of nothingness because of gravity and the other three fundamental forces (electromagnetism, the weak and strong nuclear forces) that existed before the universe.

Human beings, are merely assemblies of quantum particles – robotic computers – capable of rational, linear, and scientific thought – and somehow also capable of irrational, nonlinear, and “emotional” thoughts (even love) which drive many to irrationally believe in a supernatural God as an antidote to the “scary” “darkness” and to seek purpose to our “accidental” and thereby ultimately meaningless existence.

Though Prof. Hawking’s views that God is not necessary for the creation and operation of the Universe are certainly feasible, science alone cannot prove or disprove them. Science is unable to determine what happened before the dawn of time when just before the Big Bang, all of the energy in the Universe was widely believed to be a singularity in space and time.

How the Universe has been able to expand into nothing (just as a balloon expands into the atmosphere) and what existed before the Big Bang are unanswerable questions for scientists because we cannot perform experiments outside of the boundary conditions of spacetime.

Hawking is correct that we can’t prove God’s existence but neither can we prove God’s nonexistence. God, the Creator of our universe, is likely outside of our Universe just as Michelangelo existed outside of his famous paintings (and perhaps He may even exist inside it as well as a four dimensional projection of infinity).

As such, we cannot “prove” God’s existence within the framework of Natural physical laws that govern our current Universe. However, as one can study a well constructed sports car and, not knowing its’ designer, discern intelligence and beauty associated with the machine, so is it with our Universe.

The more I learn about the amazing ways that the physical world works, the more inspired I am that there must be a higher intelligence subtly behind it.

To me, science and religion are complementary – not contradictory endeavors of the human intellect and it is unfortunate that so much effort is squandered in conflict between religious extremists and atheists.

God’s existence cannot be proven within the framework of natural laws – we can only have faith that God exists. There can be no rational debate about God because it really boils down to matters of faith.

Some of the world’s greatest physicists such as Nikola Tesla, Isaac Newton, and Albert Einstein believed in God. Deeply religious Newton was labeled a “heretic” in part because he advocated the notion of an “invisible” gravitational field that governed the celestial motion of planets around the sun and beyond.

In fact, physicists’ belief that physical laws pervade and govern the entire Universe is a matter of faith as we have never even visited our star’s nearest neighbor (Alfa Centauri) to prove this let alone visited the other 100 billion stars in our galaxy that is one out of an estimated 100 billion galaxies in our mostly empty and astonishingly vast Universe.

Sadly for humanity, we find that there are powerful and ubiquitous efforts to discredit religion to create a “new” world order in the spirit of “worship of the Golden Calf” and thus rescind any moral foundation of society and thus bring us to the natural laws of the jungle (i.e. chaos/might makes right).

There are also efforts from some “religious” extremists to convert everyone to their religion or slaughter those who do not subscribe to the tenets of their faith such as the efforts of the Croatian Catholic Church and the Vatican to convert over 200,000 Serbian Orthodox Christians to Catholicism and slaughter roughly one million Serbs, Jews and Gypsies during WWII. These extremists use religion as a political tool and are no more religious than atheists.

We should devote our energies toward seeking truth/performing experiments – delving into the infinite natural and spiritual mysteries of this material world. We should also respect the right to disagree on matters of faith rather than battling one another on issues that cannot be resolved within our short and physically-constrained but infinitely mysterious existence.