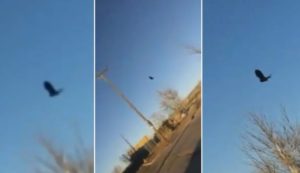 After spotting a crow seemingly frozen in the air on the school run, a family has been left puzzled.

Mum Kayleen Bowman shared on her Facebook the baffling clip that seemed to show a black crow suspended in the sky in Gallump, New Mexico, US.

The object that bears a startling similarity to a bird doesn’t appear to move an inch throughout the entire 15-second clip.

Kayleen wrote on Saturday in the caption: “The other morning Jay was taking Lilly to school.

“Lilly said, ‘Look that bird is frozen!’ Jay stopped the car to see what she meant.

“They saw this crow ‘frozen’ in the sky. Looks like it was in the middle of flapping its wings.

“Jay said you can see the beak moving. This still boggles my mind. What do you think?”

Her friends were amazed and compared to the “a glitch in the Matrix”.

Scientists: Bigfoot is a hybrid of a human and an unknown creature