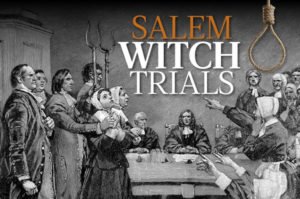 Giles Corey was born in Northampton, England, in August 1611, and emigrated to America sometime prior to 1644 as it was known that he was living in Salem Town at that time.

He later moved to nearby Salem Village to and became a prosperous farmer. There are quite a few entries in the court documents as to his behaviour, and he had a reputation as a hard and uncompromising man. In 1676, at the age of 65, Corey was brought to trial in Essex County, Massachusetts for allegedly beating to death one of his indentured farm workers, Jacob Goodale.

According to witnesses, Corey had severely beaten Goodale with a stick after he allegedly caught him stealing apples from Corey’s brother-in-law, and though Corey eventually sent him to receive medical attention 10 days later, Goodale died shortly thereafter. Corey was fined for the offence since corporal punishment was permitted against indentured servants, meaning that Corey was exempt from the charge of murder, and instead charged with using “unreasonable” force. Numerous witnesses and eyewitnesses testified against Corey, as well as the local coroner, and he was found guilty and fined.

Corey later married his third wife, a woman referred to as “Lady Martha Perkins” and they resided in the southwest corner of Salem Village, in what is now Peabody with Martha’s son Thomas from a previous marriage. Martha was outspoken about the Salem witch trials and accused the girls making the accusations of lying, only to be accused of being a witch herself in retaliation. Expecting to be exonerated she was in fact found guilty and hanged on September 22, 1692. She was 72 years old. Her husband, Giles, who had defended her against the allegations, was then also accused of witchcraft himself.

Giles Corey was arrested on April 18, 1692, along with Mary Warren, Abigail Hobbs and Bridget Bishop. The following day, they were examined by the authorities, during which Abigail Hobbs confessed to Giles being a warlock.

Corey refused to plead (guilty or not guilty), was sentenced to prison, and subsequently arraigned at the September sitting of the court. The records of the Court of Oyer and Terminer, September 9, 1692, contain a deposition by one of the girls who accused Giles of witchcraft..

Mercy Lewis v. Giles Corey: The Deposition of Mercy Lewis aged about 19 years who testified and said that on the 14th of April 1692 “I saw the Apparition of Giles Corey come and afflict me urging me to write in his book and so he continued most dreadfully to hurt me by times beating me & almost breaking my back tell the day of his examination being the 19th of April and then also during the time of his examination he did affect and torture me most grievously: and also several times sense urging me vehemently to write in his book and I veryly believe in my heart that Giles Corey is a dreadful wizard for sense he had been in prison he or his appearance has come and most grievously tormented me.”

Again, in this court, Corey refused to plead and according to the law at the time, a person who refused to plead could not be tried. To avoid people cheating justice, the legal remedy for refusing to plead was “peine forte et dure”. In this process the prisoner is stripped naked, with a heavy board laid on his body.

Then rocks or boulders are laid on the plank of wood, a process called being pressed. On September 17, Sheriff George Corwin led Corey to a pit in the open field beside the jail and stripped Giles of his clothing, laid him on the ground in the pit, and placed boards on his chest. Six men then lifted heavy stones, placing them one by one, on his stomach and chest. Giles Corey did not cry out, let alone make a plea.

After two days, Giles was asked three times to plead innocent or guilty to witchcraft. Each time he replied, “More weight.” More and more rocks were piled on him, and the Sheriff from time to time would stand on the boulders staring down at Corey’s bulging eyes. Robert Calef, who was a witness along with other townsfolk, later said, “In the pressing, Giles Corey’s tongue was pressed out of his mouth; the Sheriff, with his cane, forced it in again.”

Three mouthfuls of bread and water were fed to the old man during his many hours of pain. Finally, Giles Corey cried out “More weight!” and died. Supposedly, just before his death, he cursed Sheriff Corwin and the entire town of Salem. He was 81 years of age when tortured to death.

Since Corey refused to plead, he died in full possession of his estate, which would otherwise have been forfeited to the government and it passed on to his two sons-in-law, in accordance to his will. Martha’s son Thomas, petitioned for loss and damages resulting from his mother being hanged illegally during the witch trials. He was awarded £50 on June 29, 1723.

The exact grave location of Giles Corey is unmarked and unknown, but there is a however a grave Marker dedicated to him on Crystal Lake in Peabody, Massachusetts, in the midst of what was previously Corey’s 150-acre property, and there is also a memorial dedicated to him at the Salem Witch Trials Memorial in Salem. In total 14 women and 6 men were accused of being witches, were tried, convicted, and executed.