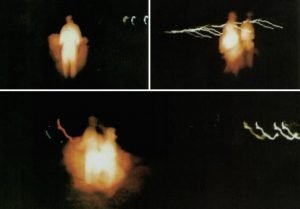 Giichi Shiota had seen a UFO before and was not shy in telling people about it, but on March 24th, 1975, Shiota had what would be considered a close encounter of the third kind.

For reasons unknown, Shiota was at a local landfill in Kawanoe, Japan, after dark when the incident occurred.

As he gladly told the story, Shiota said while at the landfill he saw something glowing at a distance of about one hundred yards. The thing was about seven feet above the ground and suddenly vanished.

Shiota said when he first saw the hovering thing he suddenly developed a crushing headache. He, however, was not deterred by a headache and was determined to see the strange object again.

Astounded by the sight of this ostensibly alien entity, Shiota became obsessed with the notion of capturing this visitor on film in order to prove that his bizarre encounter was real and not a product of an over active imagination or worse, as some no doubt speculated.

Armed with no less than three cameras — it was with a grim determination that Shiota returned to the scene of his encounter night after night.

His efforts may have been rewarded a week after the first sighting on March 31st. Scanning the sky above the landfill, Shiota observed a strange cloud that seemed to be illuminated by what he said was odd appearing electrical activity.

Then the crushing headache that he had previously experienced returned, and so did the glowing thing. When he looked up he was what he described as a Shiota bluish-white electrical disturbance floating roughly 300-feet in front of him. Again the Alien Cosmonaut was about one hundred yards away and seven feet above the ground.

Shiota watched as the cosmonaut lowered to one foot above the surface and started heading straight towards him.

When it was about fifty yards away Shiota said the six-foot tall cosmonaut stopped and then made a quick move to the right, covering some thirty yards in no more than one second. Then it was gone, vanished right before his eyes.

Giichi estimated that the whole encounter lasted no more than one minute. The picture above is one of those taken by Shiota that night.

It should be noted that just a month before Shiota’s disturbing encounter, in Kofu City, Japan, two young students also claimed to have had a face to face encounter with an unknown, suit clad, alien entity.

Whether or not there is any direct connection between these two strange cases — save that of time and proximity — remains to be seen.

Giichi Shiota never encountered this odd creature again, but whatever it was — be it alien invader, inter-dimensional being, time traveler or space-ghost — the photos prove that this thing was real and not a figment of one man’s imagination.

Aliens In the Center of the Earth: How Extraterrestrial Civilizations Travel the Universe