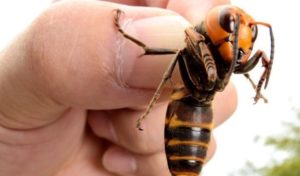 In the United States, a deadly species of giant “murder hornets” was discovered that arrived from Asia. Such insects can cause the death of an entire population of bees. In addition, they are very dangerous for people.

Experts are sure that hornets need to be destroyed as soon as possible so that they do not have time to harm anyone. Expert Chris Looney says these insects can kill bee families.

They bite off their heads, and the bodies themselves are eaten by young individuals. Ted McFall, who is a beekeeper with great experience, saw a huge number of dead and decapitated bees on the ground next to his hives.

It is worth noting that killer hornets in Japan kill an average of approximately 50 people each year. Queens of these insects can reach 5 cm in length.

In addition, this type of hornet is considered poisonous. They can even bite through the beekeeper’s protective suit without any problems.

Specialists plan to set insects on tags to find out where their nests are located, in order to destroy the entire colony at the same time.

Pay attention to the fact that in the poison of Asian hornets there is a neurotoxin that can kill a person. One bite is enough for this. Also in the sting there are 8 chemical elements that can cause allergic shock.

A Physicist Shows That ‘Paradox-Free’ Time Travel Is Plausible

An underwater ocean has been discovered in the Earth’s mantle