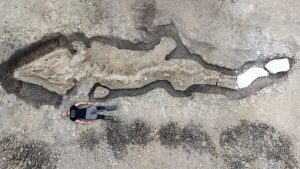 Archaeologists have named the giant “sea dragon” found at the bottom of a reservoir in the Midlands as one of the grandest fossil finds in British history.

The beast found by scientists lived on Earth almost 180 million years ago. The ichthyosaurus, found in the bed of the Rutland Water, is the largest and most complete skeleton found on the island.

The length of the skeleton from the muzzle to the tip of the tail is 33ft, while the weight of the skull reaches 2,200 pounds, reports the Daily Mail portal.

Scientists managed to find this monster at the bottom of the largest reservoir in England thanks to the fact that local animal rights activists flushed water from the reservoir to improve the habitat of breeding birds.

At first, animal rights activists mistook the remains of the giant creature for pipes, because the fossils were huge. Some of the fragments had to be lifted with construction equipment.

So far, scientists have come to the conclusion that the ichthyosaur they found belongs to the species Temnodontosaurus trigonodon. The most experienced paleontologists of Great Britain were engaged in the excavation of a unique specimen for two months.

“Despite the many ichthyosaur fossils found in the UK, it is surprising to think that Rutland’s ichthyosaur is the largest skeleton ever found in the UK. This is a truly unprecedented discovery and one of the greatest finds in British paleontological history,” said Dr. Dean Lomax, world ichthyosaur expert at the University of Manchester.

Nigel Larkin, a specialist paleontologist-restorer, noted that the excavation and removal of fragile heavy fossils from the ground required tremendous skill from scientists.