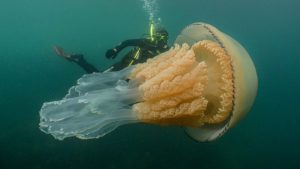 Divers found an abnormally large barrel jellyfish near the English county of Cornwall, reports The Mirror.

A wildlife specialist and her photographer set off on an undersea adventure around the UK and there was nothing brief of awesome what they witnessed. BBC host of wildlife and biologist Lizzie Daly swam alongside a giant jellyfish that seemed to be as large as her body.

“It’s known to get this large, but I haven’t seen one this big,” Daly told CBS News.

Usually barrel jellyfish are up to 90 cm long and weigh no more than 35 kilograms. These animals are not dangerous to humans.

Since the jellyfish “wasn’t something to worry about,” and Daly was so fascinated, she spent about an hour swimming with it.