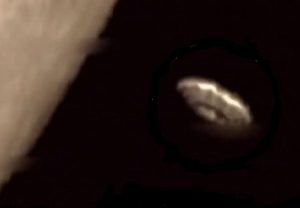 This is evidence of the existence of a UFO on the moon, obtained in China using a professional long-range camera. The video shows the passage of an extraterrestrial spacecraft in front of the moon.

On his Twitter account, Jaime Maussan shared a video that allegedly refers to the presence of a UFO near the moon and that it confirms theories about extraterrestrial life.

José Jaime Maussan Flota (born May 31, 1953) is a Mexican journalist, television personality and ufologist. Since 1970 he has been a reporter at various newspapers and broadcasting outlets, among them El Sol de México, XEX Radio and with Televisa, he worked at 24 Horas newscast.

“It happened on September 29, 2022. The huge disk-shaped ship measured about 54 kilometers in diameter,” said Jaime Maussan.

The video shows a disc-shaped UFO quite clearly. The researcher is confident that this is one of the most impressive images ever recorded during the study of this phenomenon, demonstrating the presence of ships of extraterrestrial origin moving near the surface of the moon.

UFO researchers are confident that our enigmatic moon may have a sinister alien origin that mankind is not prepared for. From astronaut UFO encounters, to flashing lights and geometric anomalies on the surface that appear to be structures, it’s possible that the moon may actually be the home of ancient aliens or serving as their base of operations.