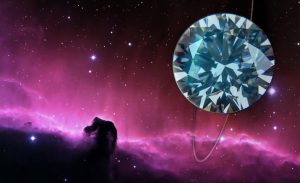 Diamonds are considered to be among the rarest things on Earth and, as a result, the most valuable and sought after but scientists and astronomers have determined that there could be diamonds floating out in space that might not only make the Hope Diamond look small, but might in fact dwarf our entire planet.

The first place where you might find a diamond the size of the Earth is a little closer than you might think: in the cores of the gas giants; Most notably, Jupiter. As you descend through Jupiter’s clouds and towards the core, heat and pressure continue to grow until the gases are compressed into a liquid and then the liquid is compressed to a solid.

It is possible that the carbon that exists in the atmosphere of Jupiter could compress at the very center of the planet into a diamond approximately the same size as the Earth.

This idea was first popularized by Arthur C. Clarke in his book, 2061: Odyssey Three but scientists believe that this science-fiction prophet might actually be right. At least four gargantuan diamonds exist in our solar system, forever out of reach in the center of the largest planets.

If only one was just floating out there for the taking…

Fifty light years from Earth you will find an enormous chunk of crystallized carbon, a diamond 4,000 kilometers across. Scientifically, it is known as BPM 37093 but most just call it Lucy after the Beatles song, “Lucy in the Sky with Diamonds” and she is the exposed core of a dead star only slightly smaller than the Earth. Scientists also believe that Lucy is a massive diamond, only slightly smaller than the Earth.

In fact, scientists now think that this will be the ultimate fate of our own unassuming sun; billions of years from now, the sun will go supernova and will cool leaving a diamond (possibly much larger than Lucy) in the middle of the former solar system.

What more fitting memorial could you ask for?

Is it possible? Do diamonds actually exist that are that big? It stretches the imagination, but one must always consider the sheer immensity and wonder of the universe and all possibilities that exist within. All things are possible.