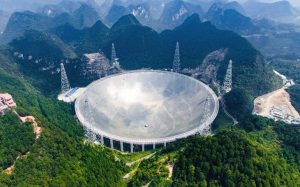 After several years of testing, the world’s largest filled-aperture radio telescope is about to start operating, reports airspacemag.com.

The new observatory in southern China, known as the Five Hundred-Meter Aperture Spherical Telescope (FAST), has a diameter of 1,600 ft and costs $180 billion to build.

The testing and commissioning process began in 2016 and is now about to be completed.

The research goals will include the observation of pulsars, the identification of interstellar particles, a large-scale neutral hydrogen survey and the search for evidence of extraterrestrial communication.

Because FAST is already tipped to be three times as sensitive as Puerto Rico’s Arecibo Observatory, it should indeed be very interesting to see what it manages to pick up.

“In the process of observing signals from celestial bodies, we also collect signals that might be emitted by humans or extraterrestrial intelligence,” said Zhu Ming, director of the scientific observation and data division at the FAST operations and development center.

“However, this is a huge amount of work, since most signals we see – 99% of them – are various noises, so we need to take our time to identify the signals we want in the noises.”