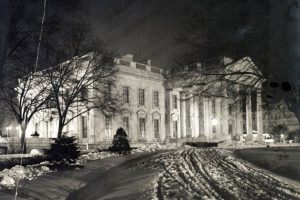 The Presidential Mansion, in Washington DC, has its specters including two ex-Presidents and two first ladies. They have been seen and heard. Who are the haunters?

The building of the White House began on October 13, 1792. It was finally livable in November 1800 and President John Adams and his wife, Abigail moved in. By the time Thomas Jefferson moved there, in 1801, most of the exterior structures were complete.

The building was named the Presidential Palace. James Madison was President during the War of 1812. British troops stormed the mansion. As they closed in, Dolley Madison requested a carriage to take her to safety.

She wouldn’t leave until the portrait of George Washington could be taken with her. After the war, the mansion was repaired and white washed to conceal the smoke marks. Because of this, the building was referred to as the White House.

Abraham Lincoln is the most frequent ghostly visitor. Queen Wilhelmina of the Netherlands was staying in the Lincoln Room on the second floor when she heard a knock on the door. She opened the door, saw his ghost and fainted.

A secretary saw Lincoln donning his boots while he sat on the bed. Eleanor Roosevelt, Theodore Roosevelt, Carl Sandburg and others sensed his presence. Lillian Rogers Parkswas an employee in the White House. She was getting the Lincoln Room in order after it had been painted.

She repeatedly heard foot steps going toward the door. She couldn’t see anyone. Finally, she went out and found a coworker. She asked him why he was stomping in the corridor. He replied he just started work that day and had not been on the second floor. Then, he added she must have heard Lincoln’s ghost.

Abigail Adams is another haunter. John Adams was the first President to live in the White House. It was drafty and damp, with the exception of the East Room where his wife hung the wash. Her phantom has been sighted, scurrying to the East Room, arms full of laundry.

Dolley Madison’s specter has been seen. She planted the original Rose Garden. It’s been said that, when Mrs. Wilson decided to remove the garden, Dolley appeared to the workmen dismantling it and upbraided them. They fled and the Rose Garden remains.

Andrew Jackson is another remnant. Mary Todd Lincoln and others have heard Old Hickory swearing and stomping about in his boots in the Rose Room, which he used as his bedroom, and in the halls.

David Burns donated the land the White House was built on. FDR’s valet heard a voice calling him and said it was Mr. Burns. A guard at the Presidential Mansion heard a voice declare it was Mr. Burns. He thought it was Secretary of State, James Byrnes, and looked for him. He later found out that Byrnes was not in the building that day.

Willie Lincoln was one of Abraham Lincoln’s children. He died while his father was President. During Grant’s administration, his ghost was seen.