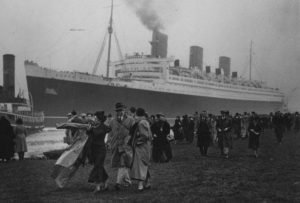 Odds are that even if you have no interest in the ocean or ocean liners, you’ve heard of the RMS Queen Mary. She was the grandest of the grand old liners, having a career that lasted over thirty years, from 1936 to 1967.

The Mary saw action as a troop ship in World War Two, she carried hundreds of thousands of soldiers and paying passengers around the world. She had her fair share of accidents, collisions and deaths in her long and illustrious service.

Today, the grand old queen is a popular hotel/museum moored permanently in Long Beach, California. However, in addition to the countless guests who pay for a night aboard her, the Queen Mary is home to many ghosts and spirits and it seems that not all of them are resting in peace.

The Queen Mary’s most haunted spot on board seems to be her swimming pool. This area is positively lousy with ghosts and nobody is quite sure why. Wet footprints have mysteriously appeared around the pool area, spectral guests have been spotted about to dive head first into the now dry pool.

Before anyone can move to stop them, the ghosts simply disappear or fade from view. The laughter of children has also been heard. Could these simply be phantom residue from the many happy passengers who enjoyed using the pool in bygone days? A ghostly photograph endlessly repeating itself?

Another of Queen Mary’s famous haunted spots is Watertight Door number 13. It’s one of hundreds of heavy steel doors designed to slam shut if the Queen Mary starts flooding, allowing the crew to contain the water to one area so the entire ship is not lost. 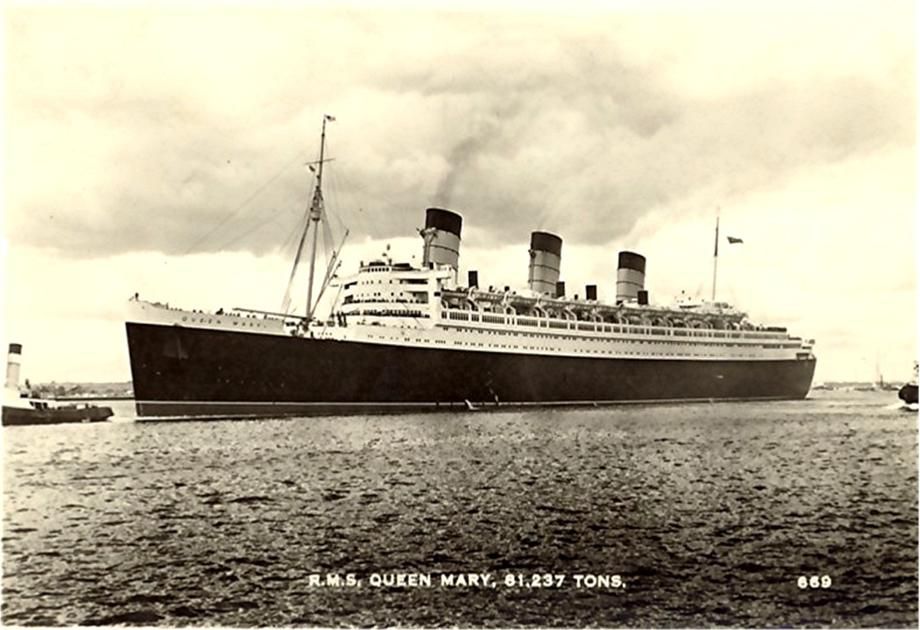 The doors can be closed by a switch up on the bridge, or manually by the crew. The doors can be very dangerous however. A bell goes off if the doors are to be closed. This give a few minutes warning to clear the area. The doors begins to close very slowly before suddenly dropping the last couple of feet and forming a watertight seal.

A popular, albeit dangerous game among the Mary’s young engine room crew was to play ‘Chicken’ with the doors. They would dare each other to jump through the door before it fully closed. This stupid game led to a tragic death. 18 year old John Pedder was violently crushed by the door when he was just a little bit too slow.

His spirit is definetly not at rest. Many have seen and heard his spirit haunting the engine room, especially Shaft Alley. He seems to be particularly interested with the young ladies on board. Some have reported feeling him touching them or felt his warm breath on their necks. Conversely, Pedder seems to ignore the male visitors.

The Queen Mary has had many captains over her long career. The last Master to chart her was named Captain John Treasure Jones, who commanded her for two years. He was the one to hand over his ship to Long Beach to be made into the hotel and museum she is today. If the stories are true, it seems the good captain still has the bridge. Literally.

Queen Mary’s bridge is located forward on the command deck, affording a commanding view of the ocean beyond. Some visitors and hotel personnel have recalled entering the bridge and being startled to see a crew manning their stations, steering the ship’s helm or manning watch posts.

The visitors have often asked about the actors putting on a show on the bridge. They are startled when informed that no such performance was taking place. Some have even mentioned seeing an officer in full dress uniform pacing the bridge or standing on the bridge wings, staring out at the ocean. It is believed to be the ghost of Captain Jones himself, still in command of ‘his’ ship.

One more place that Captain Jones have been seen and heard is the Propeller Box. When the Queen Mary was turned into a museum, two of her three screws were removed. A watertight box was placed around the remaining screw and a large hole was cut in the hull to allow guests to have a gander at this massive propeller.

This effectively renders the Mary unseaworthy. She will never sail again. Captain Jones has been seen and heard in this area, lamenting what has been done to his vessel.

Second Officer William Stark also reportedly haunts the ship. A steward had been asked by Stark to find a bottle of gin for him to share with fellow officers. The steward found a bottle in another cabin, unaware that the gin had already been drunk and the bottle refilled with a strong cleaning solvent.

The other two officers noticed their drink was not gin but it was too late for poor Mr. Stark. He died the next day. His ghost is said to wander the ship, searching for a bottle of actual gin.

None other than Sir Winston Churchill himself is said to haunt the Queen Mary. While he was Prime Minister of Great Britain during World War Two, old Winston often traveled aboard the Queen Mary under the alias Colonel Warden.

It was from his suite on M Deck, that Churchill signed the orders committing British troops to D-Day. He knew he was sending hundreds of young men to their deaths. It was a decision that Churchill agonized over and these strong emotions still hover in that room.

During World War Two, the Queen Mary was enlisted in the Royal Navy as a troopship. She dutifully carried thousands of American and British soldiers back and forth from the front lines. Most of these voyages were uneventful. But not all of them.

On October 2, 1942, the Queen Mary was traveling under escort. The liner was required to ‘zig-zag’ that is, make random course changes in order to frustrate U-boat crews attempting to attack her. it’s harder to hit a moving target after all.

HMS Curacoa, a light cruiser, got too close to the Queen Mary during one of these zig-zag maneuvers and was run over by the massive liner. She broke in half and sank almost immediately. Fearing that if she stopped to rescue survivors she would be attacked by German U-boats, the Queen Mary steamed away.

Over three hundred men aboard the Curacoa were killed in the accident. To this day, the sound of screeching metal, rushing water and the screaming voices of terrified men have been heard in this area. A residual haunting from these terrible incidents.

…and maybe, just maybe, if you’re lucky, Captain Jones himself may appear to welcome you aboard his finest ship…