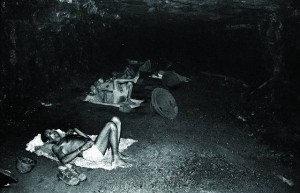 Miners, like fishermen and sailors, believe in omens. But they have lots of beliefs and superstitions that could seem meaningless to other people.

Mines in Cornwall and Lancashire were supposed to be haunted by the wraiths of tiny children who years ago used to toil in the mines until they died from weakness or from want of fresh air.

The children appear harnessed to ghostly trolleys, to warn miners of approaching danger. In some of the mines the white figures of ghostly women materialise before an explosion.

Many mines are said to be haunted by spirits and ghosts. They are possessed with a brooding presence, and, here, strong men become weak, overcome by the mere impact of the enveloping palpable fear.

It is this lower order of spectre that seeks the dark recesses of the globe, and frightens the miner at his dismal task.

There was a mine in Cornwall which was haunted by a Hand — a Hand that shone with a light not of this world, and was chill with the shivering dampness of the grave; the Hand would pursue the miner, touch him on the cheek, and then fade away with little gusts of sobbing laughter.

Polbreen Mine, an old shaft in the Forest of Dean, had a ghost all of its own. She was known as Dorcas. She was believed to be the spirit of a woman who had committed suicide by hurling herself down the shaft. She took a malicious pleasure in tormenting the miners, who sometimes became so furious that they would leave their work and rush after her.

But they never caught her. Dorcas, however, seemed to have a liking for some of the men. On one occasion a man was wielding a heavy hammer, when between the strokes he said he heard his name called sharply and insistently. He thought nothing of it at first, and went on with his work. But the crying became so urgent that at last he threw down his hammer and walked in the direction of the sound. Half-a-dozen steps, and — crash! Down on the spot where he had been standing a moment before came a vast mass of rock.

Amongst the best authenticated cases of hauntings are those in connection with tin and coal mines.

Many of them originate in Cornwall where there is a profound belief in what are termed “the Knockers.”

“The Knockers” did not confine themselves to ancient mines. They were at times heard in quite modern ones. There is a story still told in Cornwall to the effect that a man who bought a house that had just been built in a mining district was awakened one night by the sound of tramping up and down the stairs, as of an army of men in heavy boots. He got up several times to attempt to discover what it was but the moment he opened the door and looked out all was quiet. He made inquiries of one of the servants, who was a local girl.

“Those noises?” she’ said. “Why, I’m certain I heard them too. They are the knockers, and they appeared last night to tell us there is a new lode under this house that wants to be worked.”

What she said proved to be an actual fact. There was a new tin lode beneath the building, and a very productive one, too.

Wheal Vor was an old mine situated a mile north of the village of Breage in the west of Cornwall. An oft-told tale tells of a man who was acting as night watchman who distinctly heard knocking, followed by the sound of someone upsetting a cartload of rubbish outside the account house in which he was sitting. On getting up to ascertain the cause of the disturbances, he could see nothing that could in anyway explain them. In the morning he related his experiences to his mates, who shook their heads gravely, and, sure enough, before many days were passed, the watchman was taken seriously ill and died.

For many years a Cumberland man held the post of overseer in one of the coal pits until, being found out in certain acts of fraud and larceny, he was dismissed, his place being taken by a man from another county. The deposed overseer was often heard to express his hatred of his successor, and one day the dead bodies of the two men were found close together in one of the shafts. It was suggested at the inquest that they had died from accident due to fire damp.

Workers in the pit soon began to hear the voices of two men raised in furious altercation. They were recognised as belonging to the dead overseers, and from what they said there seemed little doubt that the ex-overseer had decoyed his successor into a spot where he knew there was fire-damp, in the hope that it would kill him. Fearing it might not operate soon enough, he had taken his victim unawares, and after a desperate struggle had succeeded in choking him. He had then himself been overcome by the fumes.