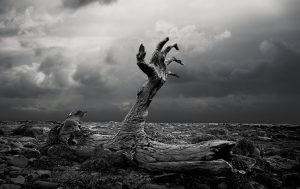 There’s the mysterious curse of Yazoo City’s witch and the ghostly residents of the Chapel of the Cross. Legends, facts and ghosts co-exist on Mississippi’s coast.

Mississippi’s Gulf Coast was the home of the Pascagoula and Biloxi tribes, pirates, a witch and ordinary people. Some of these wraiths haunt the area.

The Pascagoula tribe was a gentle one living on the river’s banks. The Biloxi were fierce. According to legend, Biloxi Princess Miona was promised to marry warrior Otanga, but she loved Pascagoula Clustee and joined the tribe.

Otanga declared war against them. When Clustee heard this, he asked to be given to the Biloxi to prevent battle. They refused, saying they would protect Miona and him or would die in their attempt.

When the Biloxi attacked and it was apparent that the Pascagoula would be defeated, they committed mass suicide by walked into the river, singing their death dirge, until all drowned.

A pirate ship was anchored by the isle ages ago. The captain had a gold-filled chest filled that he wanted to bury, so he went ashore with crew members to bury it and asked for a volunteer to guard the cache.

A sailor offered. He was decapitated and his body, buried with the treasure.

Years later, three fishermen camped on the island. They heard rustlings in the brush. They saw a headless skeletal phantom approach them, fled in terror and spent the night aboard their boat.

The specter is said to appear when people are too close to the treasure.

The house was built in the early nineteenth century by a man who was alleged to have been an agent for pirate Jean Lafitte. There was a secret tunnel leading from the house’s subbasement to the gulf and a dungeon.

Before the house was destroyed by hurricane Camille, people reported eerie incidents. There was a ghost with a compelling hypnotic stare, a spectral man who committed suicide, an elderly female phantom and her maid, the ghost of a headless pirate sporting a coat, ruffled shirt and black boots, a shirt-sleeved ghost and a grey-haired wraith with a mustache wearing a black formal jacket, white shirt and fedora who was sighted at the house’s bar.

When a witness saw the ghost and tried to talk to him, it’s said that he faded away.

The ghost of a robed woman, often accompanied by ethereal music, roams the beach. There are four legends about her identity. When Mrs. Horace Blackman’s father and husband died, she had to raise her two children alone. Her son, convicted of murder, was sentenced to life in prison. Her daughter died unexpectedly.

In the 1890s, a ship’s captain bought the house. One night, his ship was lost during a storm. She said she heard her husband calling before she dove into the waves and drowned.

The ghost was a woman who was shot and killed by her lover while she was playing the piano. When a woman and her child contracted leprosy, a servant cared for them until they died, then buried their bodies in the backyard.

The haunting ended when the house was destroyed in a fire.

Chapel of the Cross’s Ghosts

The Gothic edifice, completed in 1855, was built by Margaret Johnston in memory of her husband. Its door and the cemetery’s iron gate are locked at 6:00 p.m.

In 1857, Margaret’s daughter, Helen, was engaged to Henry Vick who was killed in a duel before the wedding. Helen spent hours crying over his grave.

Her weeping ghost has been sighted by his grave. It’s believed they are the two wraiths who have been seen sitting together in a tree. Organ music has been heard late at night.

Years ago, a caretaker became deranged, decapitated his wife and hanged himself in the chapel. Blood stains have appeared on the floor. Witnesses reported seeing a specter going through the wooden front door and the locked iron gate that protects the site.

A sheriff and his posse entered a woman’s hovel by the Yazoo River and found two skeletons hanging from rafters. She fled to a swamp to escape from them and drowned in quicksand.

Before she died, she said she would return on May 25, 1904 to burn down the town. A strong chain was placed around her grave. A fire devastated the town on that date. There are two accounts about what happened to the chain.

It was either broken into two pieces or a link was missing.

Most ghosts are a haunting which is energy imprinted on space and time, mindlessly replaying the same scenario. Historic Haunted America, Michael Norman & Beth Scott, (A Tor Book, 1995)

The blood is reminiscent of the hand print in Jim Thorpe Pennsylvania jail’s Cell 17, although the impression doesn’t disappear. Their causes are unknown.