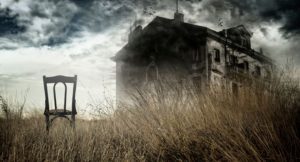 Settled in 1834, the lakefront city of Racine has more than its share of haunted locations. From a spooky schoolhouse built on top of the city’s first cemetery, ghostly pub patrons, and spectral patients at an old hospital, to a menacing apparition at a local park, there are plenty of eerie locations to keep even the most enthusiastic ghost hunters busy.

Winslow Elementary School was built on part of the site of the old city cemetery. The Racine History website explains that the cemetery was officially partitioned off for use in 1842. But by the 1900’s the city had grown up around the cemetery and the city needed the space.

In 1852, however, the city purchased 16 acres of land further west for burials. All of the bodies were exhumed and moved to what became known as Mound Cemetery, named for Native American burial mounds found on the property.

In 1856, Winslow elementary School was built on the site. But it was not unusual for remains to turn up in the school yard, and more than a few students reported seeing bone protruding from the well.

Did all of the previous inhabitants leave? For decades, staff at the school have claimed to hear phantom footsteps and voices. A custodian point-blank refused to enter the school’s boiler room, with no explanation, leading many to believe he had a paranormal experience in there.

And over the years, countless students have reported unexplained shadows and apparitions in the school’s classrooms and windows.

Immediately behind Winslow School is St. Luke’s Hospital. Founded in 1876, St. Luke’s hospital was the first hospital in Racine and has been continuously in use right up to the present.

At one point in time it housed St. Luke’s School of Nursing, the Alice P. Horlick Maternity, a medical library, and a radiology school, as well as psychiatric and surgical units, and patient rooms.

Today it houses adult and adolescent psychiatric units and a two-story long-term care nursing facility. Many souls have experienced trauma or death in this locale, and it has apparently left its imprint.

According to one employee who wishes to remain anonymous, staff and patients consistently report strange happenings, although they are hesitant to speak of them for fear of upsetting other patients.

On the third floor, staff and patients hear a patient repeatedly screaming for help and other voices, as if people are talking and laughing on the floor above, although the third floor is the top floor of the building.

Spectral figures, just visible in one’s peripheral vision, pass staff in the corridors. In one staff lounge, something unseen – thought to be the spirit of an old nursing supervisor – will knock one’s feet off the furniture. A ghostly patient walks from the offices on the north end of the corridor near Benstead Auditorium.

In the area of the old maternity ward, faint nursery music plays. And on one patient ward, charts and phones routinely fall and fly off walls and hooks as if thrown by unseen hands. The meeting hall in old medical library contains an old chair, that according to security guards, is still occupied by an otherworldly physician.

While the hospital is open to legitimate visitors during visiting hours, most of the haunted areas are restricted. The nursing school and medical library are closed.

The rumors swirling around Pritchard Park concern a male apparition with black eyes and a pale face. People who claim to have encountered this specter claim the figure approaches those who come to the park after dark, and gets close enough for his piercing stare to feel like it is “burning through you” according to one source.

After giving a deep, somewhat evil sounding growl, he suddenly fades away. There have been no reports of any physical contact or injuries.

While no one has been able to pinpoint who this apparition might be, there is a burial ground in the southwest corner of the park. East Meadows Cemetery, located on the grounds of Pritchard Park, was once a paper’s cemetery, according to the Racine Journal Times.

Most of those buried there were stillborn, or those from Racine County who died unknown and unclaimed by relatives, or too poor to afford burial. It was used until 1971 when roadwork on Highway 11.

Most of the bodies were moved to the new county cemetery, West Meadows, in the town of Rochester, but as most graves were not marked, no one can be completely sure that all the bodies were removed from East Meadows.

Pritchard Park is located Durand Ave/Hwy 11, between Ohio St. and Roosevelt Ave. Enter the park by Xanthippe Lane, off Ohio St. The police monitor this park very closely and quickly evict anyone they find lingering there after the park closes.

According to the Racine Journal Times, Doug Nicholson, the owner of Ivanhoe Pub and Eatery, is pretty sure his restaurant is haunted. Objects fall, doors inexplicably close and lock by themselves and then re-open, lights turn switch themselves on and off. Staff report hearing whistling which seems to get louder, as if the person whistling was walking by.

According to local sources, in the early 1900s a woman was murdered in the building, falling victim to a love triangle. The apparition itself is always a female form; Nicholson, his manager, and a bartender all claim to have seen the female figure that walks down the stairs and around to the first floor kitchen.

Reports of hauntings center around the sounds of what seem to be little girls running and playing. Employees report a “creepy” feeling in the basement of the building, and hearing the sound of a medical gurney being wheeled down the corridor.

The building is located at the corner of Grand Ave. and 16th St.; access is restricted to employees and contractors.

There are several other rumored hauntings around the city. These include:

The DeKoven Center (600 21st St.) Visitors and staff report hearing noises and seeing the figures of a young woman and a man in the gymnasium.

Ghost of Root River Bridge (Highway 31, 500 feet south of 4 Mile Road) Wisconsin Road Guide to Haunted Locations claims that in the 1970s, a young boy was playing in the woods near the bridge when he somehow slipped into the river and drowned in the Root River. At night, visitors to the area have seen what appears to be a ghostly image of a young boy walking near the river. While there were a few children drowned in the Root River during the 1970s, it is hard to verify that any of them occurred at this exact location.

K-Mart (2211 South Green Bay Road) Built on the site of the previous Racine County Insane Asylum, visitors to the store and surrounding area report hearing unexplained moans and fee lings of being watched. A few people claim to have been pushed or tripped.

Elmwood Plaza (3701 Durand Ave.) The storefront on the northeast corner of the Plaza is reported to have cold spots, shadowy figures, and . This space now houses a local pizza restaurant.