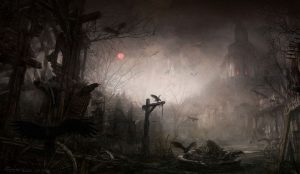 Bara-Hack is located in northeastern Connecticut near the town of Pomfret and is often referred to as “The Village of Voices”. Established in 1780 by Welsh families, it was abandoned in 1890.

Today, the village is nothing but cellar holes and an old cemetery, but the sounds of a town going about its daily life can still be heard. Are these sounds coming from earth-bound spirits, or are they sounds from another dimension breaking through to ours?

Bara-Hack, Welsh for “breaking of bread”, was settled in 1790 by Jonathan Randall and Obadiah Higgenbotham. They came from Cranston, RI and it is thought that Higgenbotham was a deserter from the British Army. They brought their families and established the village deep in the Connecticut woods.

Higgenbotham eventually started the Higgenbotham Linen Wheels Mill which made spinning wheels and looms. The mill was in business until the end of the Civil War.

Strange things began to happen early in the history of the settlement. Jonathan Randall’s slaves were the first to begin seeing ghostly appearances.

They claimed to see the ghost of a baby and ghosts of the recently departed in an elm tree near the cemetery. Bara-Hack was finally abandoned in 1890, but that did not stop the village from “living”.

After the village was deserted, passersby would hear voices and the sounds of a town still very much alive. There were reports of childrens’ laughter, dogs barking, cows mooing, and wagon wheels; the same sounds that would have been heard during the heyday of the town. The ghost of a bearded man and a small child were also often seen in the same elm tree near the cemetery.

In 1927, Odell Shepard, a professor at Harvard and Radcliffe College, went to Bara-Hack and wrote, “Although there is no human habitation for a long distance round about and no one goes there except the very few who go to listen, yet there is always a hum and stir of human life…

It is as though sounds were able in this place to get round that incomprehensible corner, to pierce that mysterious soundproof wall that we call Time.”

Paul Eno, a paranormal investigator, went to Bara-Hack with a group of students in 1970. The group saw ghosts, a bearded face floating in the air, and they saw the baby in the elm tree. They heard the sounds of the town as well.

At the beginning of his investigation, he thought that the haunting must have been coming from earth-bound spirits. As his investigation continued, he began to think that “the answer lies in quantum physics and the nature of Time itself, which may be more vast and mysterious than any of us has dared to believe.

Bara-Hack may be what Native Americans call a “thin place” where our time breaks through to alternate universes.” In other words, the village of Bara-Hack may be dead in our dimension, but alive in another.

Bara-Hack remains an unsolved mystery. Ghostly sounds can still be heard near the abandoned village, and visions of the departed are seen near the cemetery.

Would-be ghost hunters should be aware that there are “no trespassing signs” posted around the sight and permission to investigate should be obtained.

Bara-Hack is still one of the haunted places of Connecticut and its secrets are waiting to be discovered.