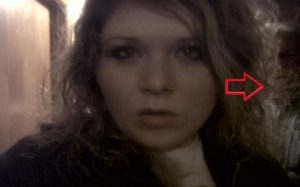 A woman took pictures of herself with her cell phone to post on Facebook and she noticed something weird in one of them. She posted the picture on Facebook in a paranormal discussion group and the picture became viral.

Andrea Dawn believes it might be proof of the supernatural. In the photo, an eerie figure is seen lurking behind her.

She visited the home of her parents in Indiana when she took the selfie. Dawn claims when the picture was taken she was the only individual in the house.

“I don’t live in the house, I live in Cincinnati, Ohio. My parents live in Albany, Indiana and I go home to stay for a couple of days at a time when I visit them. My mom was at work and my dad went to pick up some cigars and get gas because we were going out to eat dinner. I was getting ready and thought I would take a photo and post it on Facebook so I did. I didn’t see it at first until recently and I thought nothing of it. I haven’t had anything else happen to me like this before,” Dawn said in an interview with Erie Echo.

“It looks like a man standing to the far right of me. Where it’s standing is a doorway that leads to my grandparents old bedroom,” Dawn said.

The photo was examined it shows no signs of being edited or being tampered with. Some people believe that the anomaly in the photo might be visual paredolia or an actual person. Other folks think that it might actually be a spirit that is attached to the house that visits the family.

Amy Winehouse’s father claims he is visited by her ghost