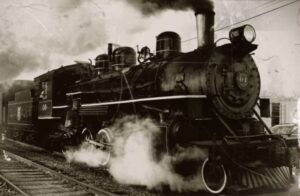 This creepy story is about a ghost train that disappeared into thin air with all the passengers on board. It was never to be found again, and the whereabouts of these passengers are still a mystery.

Authorities could not believe how a whole train could disappear without leaving a trace. Investigation on this mysterious disappearance could not come to any conclusion.

In 1911, an Italian company pioneered in making trains named Zanetti, decided to launch a new train on a newly laden track to facilitate wealthy passengers to travel through the scenic beauty of nature through the Lombardy Mountains. The luxury of passengers was the prime importance of the company.

Throughout the journey, the passengers would be feed with food and liquor, and they can enjoy the scenic beauty of nature through their window by enjoying their meals and drinks. The route of the train would take the train through the Lombardy tunnel that was half a mile long. This tunnel happened to be the longest rail tunnel constructed of that period.

Considering the targeted passengers, the train consisted of all the latest luxury amenities in their coaches. The train itself was a brand new train built with every latest technology available during that time.

The train was ready with all the amenities for the trial run. The train had three luxuriously designed compartments along with an engine. To make the trial run successful and grand and to promote and advertise their train, the management of Zanetti came up with an innovative idea.

They selected and invited 100 people to be the first passengers of their train that will be undergoing the trial run. They will be travelling free from the starting station to the end station and will be returning to the starting station. During their journey, they would be fed on their way with food and liquors.

The idea behind this thought was to make the train popular among the wealthy people so that, they can enjoy their journey and share their experience with others resulting in earning of more revenue. This would also serve as a means of advertisement and promotion.

On 14th July 1911, the train departed from the starting station on time with 100 invited passengers and 6 crew members, making it 106 passengers in total. The passengers were enjoying their meals passing through the scenic beauty of the mountainous suburbs. Some were having chats, and some were looking through the window.

The train was passing through the stations one by one. The passengers were enjoying their journey. People standing in the station waived at the train passing by. The train stopped at the desired station and again started for its onward journey.

During the journey, the train reached the Lombardi tunnel. The train entered this tunnel that was half a kilometre long. Many people standing beside the track saw the train heading towards the tunnel.

The management of Zenetti Company was bewildered; they were not able to understand the reason. An investigation was launched, to track the missing train down and find the condition of passengers. After the incident, the railway workers and management officials searched every square meter of the tunnel, but the train was nowhere to be found.

Evidence revealed that the train departed the station before entering the tunnel, but no one saw the train to come out of it. How can an entire train itself disappear without leaving a trace? The Lombardy tunnel was just half a mile long, and there were no other diversions, only the other side to go. But neither there was any train nor any sign of an accident. The train just vanished.

During the investigation, all the data from the signal, intermediate stations were collected. They failed to produce any conclusive explanation, as to where the train disappeared along with its passengers.

Two passengers came forward and claimed that they were part of the invited passengers of the train. The passenger list also confirmed their presence. They both managed to jump out of the train as it was entering the tunnel.

One of the two survived passengers told the Italian media, that he heard a humming sound as the train approached tunnel with a white dense fog of cloud was engulfing the train like a wave. The first compartment was entirely inside the tunnel, and the train was moving slowly. He got scared and jumped out from the third compartment of the train.

As he was jumping out, he also saw another passenger jumping out of the train. They both hit the ground hard, and that was the last thing he remembered. These were the only two surviving passengers of that train.

Both of these passengers were, examined by a psychiatrist, and found that they suffered from sleeping and other stress disorders. The information from both these passengers did not provide any evidence as to where the train is.

The officials decided to close the tunnel for rail traffic. During World War 2, this tunnel was bombarded and closed forever.

There are records of medieval monks from Modena who saw a three-car train with people in it. The horse was the only fastest means of transport at the time. The Same Zanetti train running through the tracks was spotted in many other countries, in Germany, Romania and Italy.

The strange incident of the train did not stop here. One of the relatives of a passenger was looking through the archives. He found an interesting record, in 1840 local records of a hospital suggested that 104 Italians were admitted to their hospital in a mentally disarranged state.

The psychiatrist treating them left a note saying all the 104 patients were dressed in strange clothes and all of them claimed that they travelled in a Zanetti train from Rome in Italy. What surprised the nurse and the treating doctors in 1840 is that they could not make out how all the admitted persons were claiming the same thing.

Some of the admitted persons had a cigarette box having 1907 as the date of manufacture written on it. The cigarette box is still preserved in a Mexican museum. All these patients were behaving strangely, so treating doctors and nurse did not take them seriously.

A train that was built in 1911, carrying 106 passengers out of which two passengers jumped out making the count to 104, lands up in a hospital in a mentally de-arranged state in 1840 claiming that they are the passengers of the Zanetti train. The psychiatrist was not able to come up with any conclusive evidence. There were no further records of the patients.

On 29-October 1955, in a small town named Zavalichi in Ukraine, in the erstwhile USSR, an on-duty signalman saw a strange old fashion train running slowly on the tracks. He checked his schedule book regarding its arrival but found nothing.

The train had the same Zanetti engine, without anyone in the driver’s cabin, the three carriages of the train were all locked and the window curtains down.

The signalman rubbed his eyes and was not able to believe where this train arrived from. He had never seen such a train before. The description of the train provided by him exactly matched with that of the Zanetti train.

It is unlikely that a signalman in USSR would know anything about the Zanetti train that was lost in 1911. The same train was again spotted in 1991 near Crimea.

Though scientist failed to come up with a suitable explanation, many believe that the train and the passengers entered in time travel and subsequently lost in time. The train keeps on appearing in different eras making this disappearance and reappearance as a unique case of time travel with no scientific and conclusive evidence.