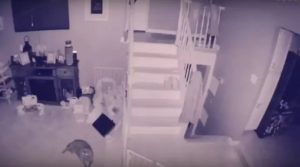 Footage filmed previously this month inside a Long Island home demonstrates a ghost entering through the door, reports Lad Bible.

The video was recorded by 33-year-old Joey Nolan on August 8th. Joey was going over some of his CCTV footage when he noticed something strange on the right corner of the frame.

The faint outline of a human-like figure can be seen entering the building at roughly 12:54am before mowing around on the landing for a couple of seconds and disappearing.

“At first it was kind of sketchy, but we’ve attempted to open a line of communication, just in case it is a spirit,” said Joey. “We have an ‘our house is your house’ kinda approach to the situation, as long as it stays pleasant, we’re not trying to involve the church.”

You can see the footage below (look at the door)-could this be proof of a paranormal visitor or is there a more natural explanation?

Astrophysicist Joe Pesce: Can a time traveler change the past?