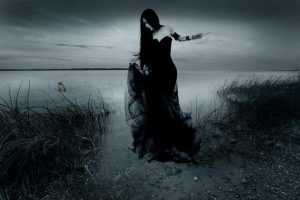 The despair of unrequited love, no matter how one sided, has such power over its constituents that it can transcend the boundaries of life and death. The sad, sad sobbing of one such broken heart can be heard along the shores of Lake Champlain near the historical Fort Ticonderoga.

The solitary figure of a woman has been repeatedly seen, her gowns billowing amongst the icy waves of the lake. She is the ghost of Nancy Coates, onetime lover of General “Mad” Anthony Wayne. “Mad” Anthony Wayne is no stranger to fame, he is well known from history for his military prowess during the Revolutionary War.

A vigorous and hearty man with a penchant for quick action and brilliant strategy, Wayne was a man who enjoyed the pleasures of the flesh, and was quick to notice any attractive women that might cross his path.

In 1771, Wayne was given the commandant of Fort Ticonderoga and hosted a dinner party to celebrate his new post. At his party, two women caught his eye. Penelope Haynes, the daughter of a rich Vermont landowner, had a youthful countenance and attractive curve to her face that left many a young man wanting. She was beautiful but more the type to wed than to engage in sultry endeavors beneath the covers.

Nancy, on the other hand, was a local widow who served at the party. Nancy was well known and liked among the anxious soldiers at the fort for relieving lustful tension. So while Wayne remained infatuated with the scarlet beauty of Penelope, he seemed satisfied enough to occupy himself with Nancy.

Being the nature of the man, his intentions toward both were nothing less than disreputable. Wayne had no inclination to marry either one but to stay the celebrity soldier and reap the benefits. Unbeknownst to Nancy unfortunately, who began to truly love Wayne and whispered plans of marriage in his ear at night when they lay quiet, he saw this as nothing more than a distraction.

His view maintained an air of immediacy, not a permanent love affair. He was satisfied in the moment and would take his leave when the time came. Had he given Nancy a definite answer to her marriage proposal either way, he may have avoided her death and robbed Lake Champlain of just one more ghostly specter from haunting its shores.

Wayne received orders from General Washington to give protection to the women of nearby towns in Vermont and New York, states where British attacks had been increasing in pressure. Wayne obliged, undoubtedly pleased with his task, and escorted the caravan personally back to Fort Ticonderoga. Riding double with him was one Penelope Haynes.

Nancy, unaware of the purpose of his mission, asked around the local village as to the whereabouts of her robust General. As a joke her fellow lady friends informed her that Wayne was bringing home his young bride.

Heart broken Nancy sought to verify this with one of the soldiers who also agreed to the validity of the tale. Moreover it is probable that since her romance with Wayne began, her extra curricular activities ceased with the other men who were left without her favor and frustrated.

This is most likely the reasoning behind the false account she received from her soldier acquaintance. Nancy was left at a loss and she found herself wandering the many narrow lake paths that twisted through the brush.

She was near enough to the fort to hear Wayne’s return and rushed to the trail to meet him. But as she came into sight of the caravan, Wayne was engaged in lively conversation with the young Penelope.

Unaware of the pale face that stared up at him wide eyed and trembling, or of the icy cold fingers that touched his boot as he passed by, Wayne saw nothing but the auburn locks and milk white skin of Penelope.

To Nancy, this proved true the story of his disappearance and subsequently sealed her fate. Back to the water, the cool translucent blue, the soft edge of shore a comfort to tired feet and how mesmerizing the rhythmic waves can be. Those cold fingers could not feel the frigid temperature of Champlain but her ears could hear the laughter.

Laughter of the local women scoffing over her choice of lovers, laughter of the soldiers snickering at their posts, knowing what truth lies in the deception. But most of all she could hear the melodious laugh of Penelope Haynes, astride her lover’s mount touching his waist for balance.

She could not return to him or the fort, the tranquility of Lake Champlain called to her now, its choppy face a comfort. The lull of lapping waves soothed her thoughts, offering respite, silence, and a dark, quiet grave. Nancy chose to find solace under the waters of the glacial lake as an alternative to the false security of her lover’s arms.

The lake accepted Nancy, let her walk into its serene body and pulled her down to the depths to keep her lonely frame forever. It would later give back her tired listless body to a couple of fishing soldiers who found her floating among the reeds.

She faced the sky, her hair, floating soft and elegant with the pulse of the water was the only part of her left with any hint of life. But in death the languished brow was smooth and her eyes, coreless in life were closed in peace and finality.

While death came as an alternative to what she knew as the reality of truth, Nancy was not peaceful in death. Her ghost returned to the shores of Lake Champlain, continuing to pour her sorrows into the lake.

She continues to walk the paths she took in life, giving campers, fishermen, and tourists alike, scary stories to tell at night. Some have seen her running along the long forgotten footpaths around the lake, or see her waiting by the fort gate for the return of her beloved.

Others have seen her walking amongst the guardroom and in an alley where cottages once stood. One man discovered the body of a woman floating softly among the reeds after he followed the sounds of crying to her location. When he attempted to reach her she floated away into the darkness of night and the sobbing disappeared.