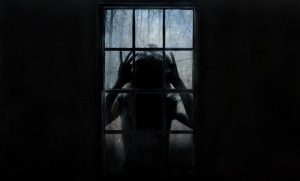 In the late 80’s and early 90’s my family and I lived in Conn in a small town called Ridgefield.

Ridgefield is a very old town dating back to pre-Revolution war times. Ghost stories in the town were numerous and often told at camp fires and on Halloween. But none of the stories ever scared me. It wasn’t until one day when I witnessed a ghost myself that I started to feel nervous about where I was.

I worked in a small restaurant called the Rusty Nail. The building that the restaurant was in was very very old and was always rumored to be haunted. I was only 16 at the time and at that age was able to believe in anything. Well one morning while I was taking a break at the bar before the lunch rush came in, the waitress came running downstairs from the restaurant and ice machine on the 2nd floor screaming.

She was pale all over and extremely frightened. After she had calmed down a bit she explained that when she went upstairs to get some ice, something weird and very scary had happened.

As she went to open the doors that hid the ice machine from customers she saw something in the corner of her eye. When she turned to look what she saw was a small patch of fog like substance floating in the air. She stared at it for a minute and just when she was about to reach out to touch it, it rushed at her and went right through her.

At first I wasn’t sure what to think of the situation but when I looked at her she was as pale as a ghost herself. After she was done explaining what had happened she then stated that she would never go back upstairs by herself ever again. This of course put me in a great mood for what I had to do next, cause the boss then made me go upstairs and get the ice myself.

However, it was not during this trip to get the ice that I saw the ghost. In fact going and getting the ice did nothing but make me rather tired for the rest of the day.

Well, one Sunday evening in the summertime one of my co-workers and I were closing up the restaurant and were about to head home. As I was getting on my bike and he was about to get in his car I looked up at the 2nd floor window. When I did I saw an older woman up in the window looking down at us.

She was dressed in rather old fashioned clothes and I was thinking that maybe we had not gotten everybody out of the restaurant when we closed it. I told my co-worker and he looked up and saw the woman too. So we both went back to the building and opened the door and started calling out to the lady that we were closed now. When we got no answer we both went upstairs and looked for her. Of course she was nowhere to be found. We checked the entire restaurant for her including the bathrooms and behind the two bars but there was no sign of her.

Without saying a word to each other about what was going on we both left the building and went home and never did we talk about it.

Some years later I saw an old friend of mine from the restaurant and while having a few beers and rehashing some of the old stories about the place we came upon the subject of the ghost. Apparently many people had seen the ghost over the years including several customers.

I guess somebody had even written a small book about the ghost but to this day I have never seen it. Seems the lady that we saw had lived in the building when it was still a house back before the revolution and had died there of old age. That would possibly explain who she was, but who can say for sure.