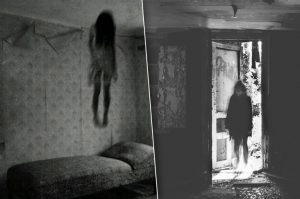 This is absolutely the truth. From the time I was born my life had been different than any others. It started out very abusive then turned worse. Anyway, my father ended up in prison for 18 years and my sisters and brothers and I went up for adoption.

Eventually, we all found each other and some of the answers to the fears and nightmares that have haunted all of us. We came to realize that we shared the same dreams or likeness. Well it turned out they were true. They weren’t dreams or nightmares but they were actual events. That made matters worse and that’s where the hauntings begin.

I was but five years old at the time but remarkably intelligent and afraid of nothing. I did after all fight the devil and won. After my new parents came to pick us up things began to change. I was religious I prayed all the time, talked to God, sang to him and wrote letters a lot, like a journal, addressed to God.

I moved into a new big house with carpet! It was a fairy tale, except for the person unseen in the old house. The house was built in 1864, the man who built it died in it along with other people of unknown names. I will find out though. I never would sleep in my own bed of course my new mother was never told what happened to us, so she just thought it was because of a strange place and strange people. So she let it go for a while.

Then she said it was time to sleep on my own. My sister was in the room with me she can verify everything that happened. I started out having the same dream over and over again. I would jump out of my bed and jump into hers.

I don’t think my feet ever hit the ground. Then that’s when the voices started. I’d be sitting there playing with my barbie dolls and someone would come right up to my face and yell. I’d look around and no one would be there. I would take off running down the stairs at a fast rate almost falling in my haste.

Most of the time things happen at night. One night in particular I remember being woken up at my bed shaking. That alone scared me, then downstairs I would here pots and pans clanging, I would get up to see if I could see anything, there was no way in he** I was going down those stairs, so I tried to see through the dark, I didn’t see anything until leaning over the railing as far as I could but not far enough to fall I heard this voice he said “hello” it was so deep he could have been in a well but so close I believe I felt his breath on my face. I ran like lighting into my moms bed.

Years went by nothing changed the basement was the worst my sister and I both would go down there only when forced and run as fast as we could back up the stairs. The stairs were open there no walls beside nor behind so you could see, but we always felt that someone was watching us and would grab our feet.

Being 10 you would feel pretty silly but we knew it was real. That very summer my friends and I had the usual teenage parties candle viduls and ouji board games. And I think that’s where the ghost started following me everywhere I went. Someone would piss me off and they would get hurt, just little things like that.

Time passed I have three children now all which are afraid of the house, I have never told them of the house or its hauntings, I always thought it was because I was special but I think its just him saying hello. Come to find out a man had died in the house the day of his daughter’s wedding. And so his spirit belongs there.

I named the other ghost Sophia because she follows us everywhere, the way I know this is mom tells me she hears things in her kitchen all the time, and also sees shadows out of the corner of her eye. So I know its not him, its the ghost of the ouji board Sophia. Anyway she doesn’t like kids we spent plenty of nights awake with nightmares and beds shaking.

My daughter which was only 6 months old would wake up screaming like someone has scared her. Finally I had enough, I don’t know if the thought popped into my head or if I read it somewhere or what anyway I prayed for a solid week for that person to find the light and to enter it and asked God to help them find the light sure enough we have rested in peace since then. My mom still hears things in her kitchen, she says he’s been here so long it just seems natural now.

The place I live in now has a spirit a nice one too. She mostly likes the stairs I always feel someone there watching and sometimes I book it up those stairs afraid but I get a hold of myself and continue on.

I’m 29 and still afraid of ghost, my husband told me he’s never seen one until he was on the throne one day and watched as a shadow passed right by him he said it scared him so bad ever since then he has believed me when I tell him I see things and hear things and he also believes the kids!

Thank you for reading this. I know it’s not much but it scared the sh** out of me and still does sometimes. And for all those I have read that has seen them I personally know how you feel.

Halloween Which I Will Never Forget