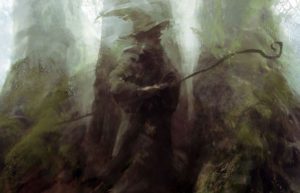 Weir shocked Edinburgh with a confession that led to his execution. His house became a scene of ghostly activity. The house was demolished, but his spirit still lingers.

Major Thomas Weir lived during The Burning Times, the height of witch hunts, persecutions and executions.

Protestant King James VI of Scotland, who was later and better known as King James I of England, detested witches and those suspected of practicing the craft.

In Scotland, between the mid-1560s and early 1700s, it’s thought that between 3,000 and 4,000 accused witches may have been executed, most of these during King James’ reign. Although his reign was over when Weir was a young child, the atmosphere the monarch created lingered.

He was born in 1596 in Carluke, Lanark, South Lanarkshire. Weir was a Lieutenant in the Scottish Puritan Army, the Covenanting Army of James Graham, the Marquis of Montrose. Weir trained radical Protestants.

After retiring with the rank of major, he held the post of commander of the Edinburgh Town Guard. When the defeated Jacobite General James Graham, Marquess of Montrose was in an Edinburgh jail before his execution, Weir sadistically mocked and psychologically abused him.

Weir was honest and known for his piety which bordered on fanatacism. He lived with his spinster sister Jane, also called Grizel, Jean or Janet depending on the source. The major always carried a black Thornwood staff with heads carved into it.

He was a powerful orator, delivering resounding prayers to the vast audiences he attracted. The major was the epitome of the establishment.

All was well for the brother and sister until Weir shocked Edinburgh in 1670.

The major was leading a prayer meeting when he suddenly confessed to practicing witchcraft, sorcery, heinous crimes, satanic acts and to being a wizard. He said he committed incest with his sister, Jane whom he claimed was also a witch.

People thought he was insane until his sibling confirmed the confessions and claimed Weir obtained his powers through his demonic staff.

The Weirs were tried, found guilty and sentenced to be burned at the stake. Neither was repentant. Some say Jane stripped naked as she was led to the scaffold at Grassmarket.

Thomas was asked to say “Lord be merciful to me.” Instead he, allegedly replied “Let me alone, I will not. I have lived as a beast, and I must die as a beast.” Weir was strangled before he and his staff were burned at Greenside. It was said both were difficult to burn.

After the executions, the house that Thomas and Jane lived in at West Bow in Edinburgh’s Lawnmarket district was said to be haunted with ghostly sounds of carousing.

People claimed they saw Weir’s staff, floating outside the building. Some reported seeing a phantom coach pull up to the door, allegedly, to take the Weirs to hell. An elderly couple, attracted by the cheap rent, moved in.

They left the next morning, claiming a calf looked at them through a bedroom window. There was no explanation why this scared the couple.

According to a book published in 1825, at midnight, witnesses saw strange lights fill the house and heard sounds of howling and dancing. Sometimes, there were sightings of the major emerging from the alley astride a headless black horse galloping in a whirlwind of fire.

Writer Sir Walter Scott visited the house shortly before it was demolished and testified to its eerie atmosphere.

Although the Weir residence, located between Edinburgh Castle and the Grassmarket, was torn down in the 1800s, people have seen strange lights and heard sounds of revelry in its former site.

The Locals Stay Clear of This Abandoned Funeral Home of Coventry

Bizarre Tale Of Stranger In The Church