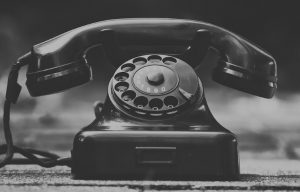 Apparition’s telephone calls were intentional and made to tenants of her former home and others to convey meaningful messages. Read about Enid the Helpful Ghost.

Enid, an elderly spinster, died under a weeping willow tree in the garden of her cottage, which she had rented for around twenty years, near Sandbach, England. The reclusive woman loved her garden and carefully tended to it.

Rumors were that she had been jilted by a man and decided to remain single. Within months after her death, new tenants of the cottage reported seeing the ghost of an elderly woman in the garden during a moonlit night.

The landlord saw Enid’s phantom when snow was on the ground. There were no footprints in the snow to evidence a human presence. Former tenants told him about calls from an old woman who gave them warnings and advice. Sadie knew nothing about her when she moved into the cottage.

In the late 1980s. Sadie’s husband died and left her a sizeable inheritance. She and Abigail, her seven year old daughter, moved into the rustic cottage that had been Enid’s home.

Sadie wondered why the rent was so low for such a desirable place. She fell in love with the garden where the weeping willow tree was.

One December evening, Abigail told her mother she saw a nice old woman, wearing a long black dress, standing under the weeping willow. The woman smiled at her and waved before fading away.

One night, Abigail said she didn’t feel well. Sadie thought the girl was tired from getting up early and helping her in the garden by digging weeds. Around 11:00 p.m., someone knocked on the cottage door.

Sadie went downstairs and asked who was there. A man replied he was a doctor and had been called to check on Abigail. He called Sadie by name. She allowed him to enter the cottage and explained that she hadn’t called him.

He examined Abigail and discovered symptoms of meningitis. The doctor drove them to a hospital where his diagnosis was confirmed. The girl was treated and recovered.

In 1989, a man went to Sadie’s cottage. He said his car ran out of fuel and he asked her if she could lend him a few pounds so he fill his gasoline can at the nearby filling station.

If she would do so, he would leave his watch as collateral. She gave him a five pound note and he gave her his watch. When he returned, he filled his tank, gave Sadie the change from the note and said he would return with the rest of the money.

He came back that evening with a bouquet of flowers and the money he owed her. As he was leaving, Sadie said he forgot his watch and invited him to stay and have a cup of tea with her.

He told her his name was Tim and that he was from Middlewich. He said he had recently been jilted and was wary about getting involved with a woman again.

She said he shouldn’t give up on women. They exchanged phone numbers. Sadie called two days later and discovered his phone had been disconnected.

Two days later, Abigail answered the phone and told Sadie it was for her. There was an elderly lady on the line who told Sadie unsavory things about Tim from Middlewich. She said he was a bigamist and a con artist who knew about her inheritance.

When she asked the caller who she was, the woman said that the landlord could give her an answer. Tim visited the following week with more flowers and a bottle of wine.

When Sadie confronted him with the information the elderly woman had given her, he left immediately. A few months later, a neighbor told her that Tim had been in jail for six months because of fraud.

It was rumored he had two wives, but lived with his mistress in Middlewich. When Sadie talked to her landlord about the mysterious events, he told her about Enid and her ghostly activity.

Phone Calls from the Dead or a Helpful Apparition?

The former is a phenomenon when the dead and the living have communication by telephone. Parapsychologists D. Scott Rogo and Raymond Bayless have done extensive research about this subject.

It is extremely rare that, if ever, that these calls have been accompanied by apparitions, intelligent ghosts. They have warned people of danger and otherwise helped the living.

They have been known to change channels on TVs and radios, fold laundry and do household chores. This is a case of an apparition who uses a phone to help people, not multiple phone calls from the dead.