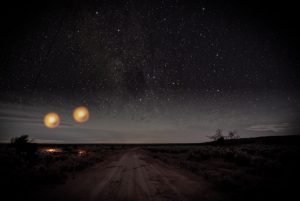 Ghost lights, also know as earth lights or spook lights, normally are spherical in shape and vary in color with the most common being white but pale blue and red are also quite common. The lights have been observed on every continent on Earth and strangely one may be seen in an image from NASA’s Mars rover Curiosity.

Wherever Ghost Lights occur there is typically a legend has formed to explain them. These legends often involve ghost or other supernatural spirits. Typically the legend attempts to explain the light as a restless spirit doomed to wander the Earth because of some traumatic event it experience while living.

Another example comes from Asia and. The Aleya are believed to be the ghost of fisherman who died while fishing. These spirits have an unpredictable nature sometimes they help the fisherman avoid dangers and other times may confuse or lead fishermen into danger.

Natural explanations include ball lighting and electrostatic coronal displays similar to St. Elmo’s Fire. One common suspect that is put forward is marsh gas otherwise known as methane. How the methane spontaneously ignites or glows is never made clear.

Whether you choose to believe Ghost Lights have paranormal causes or more natural explanations the phenomena is real, observable. and photographed frequently. This makes them a great candidate for a paranormal road trip to possibility view.

Marfa is a small town in Texas that has 10 to 20 sightings a year for some time now. The Ghost Lights are described as roughly basketball size and appear in a variety of colors including white, red, green, yellow and blue.

A viewing stand is available to watch the lights that generally appear along U.S. Route 67. The lights are said to hover above the ground and last anywhere from minutes to hours in duration.

This Ghost light is located in Surrency, Georgia along the Macon/Brunswick railroad tracks.The light is described as a bright yellow ball that disappears when approached. This Light has been observed since the turn of the century.

Local legends connects the Ghost Light with the Surrency ghost that haunted the home of A. P. Surrency (the town founder). Other explanations include geological anomalies as theorized by Cornell University professor Larry Brown.

These Ghost Lights are located at Brown Mountain, North Carolina. Sightings of these Ghost Lights by Cherokee Indians in the area date to nearly 800 years ago. Tribal legends held that they are the spirits of slain warriors. Reported sighting continue to the present.

The Ghost Lights have been described as being white, yellow or red. The lights have been reported to be both stationary and moving. The best time to possibly see these lights is the Fall.

The West Point Spooklight is a Ghost Light located in West Point, Virginia. It appears near the railroad tracks at Cohoke Crossing near the York. The lore surrounding this Ghost Light is because it is believed to be the origin of the phrase “Asleep at the switch”.

In 1864 after the battle of Cold Harbor a train carrying wounded Confederate soldiers derailed on its way to West Point. The cause of the derailment the signalman who was suppose to switch the tracks was “asleep at the switch”.

Waking too late he began waving his lantern to warn the approaching train. The train unable to stop derailed, killing all aboard and decapitated the signalman. The Ghost Light we see today is the signalman still trying to stop the train.

Located in Watersmeet, Michigan this Ghost Light is one of the most reliable ones to observe. Local residents claim the Ghost Light can be seen almost every night. Similar to the West Point Spooklight local legends associate the light with a railroad brakeman who was killed in an accident decades ago.

The Ghost Light is believed to be the light from his lantern. The light is often seen as a bright white light but red and green have been reported. Skeptics have tried to explain the lights as coming from cars or planes even though the lights predate the existence of cars and planes.

As mention before the previous examples are but a small sampling and are limited to the United Sates. One could devote an entire book or website on the subject of Ghost Light sightings.

The Naga Fireballs range from the size of the sparkles to that of soccer balls. The number reported observed in a night covers the span of 0ne or two to thousands. Skeptics have claimed that the Naga Fireballs represent nothing more than tracer fire from bullets.

The idea that the Naga Fireballs are tracer fire conjures up the image of an elite combat divers tasked with swimming up and down the Mekong River and randomly firing off tracer rounds from the river. You can see a video of the lights Here.

Dowsing: Ancient Technique To Find What You Are Looking For