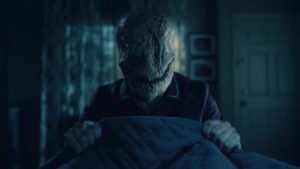 This took place in Port Edwards, Wisconsin in 2002. I was 21 at the time, and my belief in the paranormal was non-existent. Whenever I heard stories from other people, I just laughed them off because I had never experienced anything like that before.

This night would change my view on this subject forever.

My girlfriend at the time, some friends and I all went out to a movie and bowling. We were out for about five hours and were all exhausted by the end of the night. Our friend and his fiancé had an old home that they were doing renovations on for the past two years. It was in an old part of town where most of the houses needed a lot of work done.

We all got went their house just to hang out and talk. We were there for about an hour when weird things started to happen. While we were all hanging out in the living room, all of a sudden we heard the faucet in the kitchen turn on. We heard the water hitting the sink, and my girlfriend and I were confused about what was happening at this point. Our friends just looked at us like everything was normal, and one of them walked into the kitchen and turned off the faucet.

He walked back into the living room casually and sat back down on the couch. He knew by the expressions on our faces that he needed to explain. He preceded to tell us that this house is haunted and that weird things have been happening lately. Of course, I didn’t believe him whatsoever, and my girlfriend was just plain scared.

A little while later, we all decided to build a fire in the backyard. It was November, so it was one of the first nights when it was cold enough to wear jackets. After we were out there for 30 minutes, we decided to go back into the house. We put out the fire and started to walk up to the back sliding door when we noticed it was closed and locked.

We had been the only ones in the house, and our friends left the door cracked open because everything else was locked and their keys were inside. We were all confused because we all knew the door was cracked open 10 minutes before.

We were trying to get the door open when things started to get scary. As we were trying to pull the sliding door open, we saw a man walk into the kitchen, a man none of us knew. The kitchen light was off, and the living room lights were on, so we couldn’t clearly make out what he looked like. We were all stunned and frozen by the sight of this unknown man.

The girls screamed and backed away from the door, and my friend and I were yelling at the man to leave the house. All this man did was look at us with what we could see was a blank stare. He was a very tall man with long hair. He had his hands balled up in fists while standing very aggressively toward us.

At this point, we had everything riding against us. Our keys and cell phones were all inside, so we couldn’t call the police. Then he suddenly stepped closer to us, almost to the point where his face was touching the glass. He had this smile on his face that I will never forget. It was a sadistic smile, like this man knew we were helpless.

We told the girls to run back toward where the fire was because at this point my girlfriend was about to cry. The terrifying thing that I noticed was that while this man was up close to the glass, his breath wasn’t showing up on the glass. This sent chills in my back.

REAL, BUT NOT REAL

After about five minutes of us staring back at each other, and my friend and I yelling at this man to leave, we decided to break in and get him out. We started to pull harder on the door and the man suddenly backed away. His eyes opened very wide, like he was afraid. He quickly turned around and walked into the living room. Right before he left our field of vision, he vanished.

I swear up and down that this man seemed as real as any of us there. I felt very sick and perplexed. We eventually got the door open and searched the whole house, but no one was there. We were going to call the police, but we all had a feeling that the police could not help in this situation.

To this day, my girlfriend and I have never been back at that house. Our friends have experienced other things after this, but nothing to this extent. Whatever is in that house, I don’t think it knows where it is. I will never get this man’s smile out of my memory. I hesitate to believe in these types of things, but after this incident, I can’t deny that there are other things out there that are not explainable.