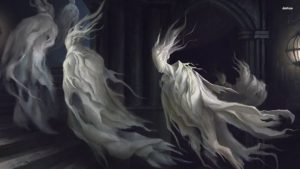 The first step is researching the various types of hauntings, and learning to identify the types you are dealing with. Before starting your investigation, make sure to get information on the history of the location, and interview any known witnesses to the phenomena. Building records are available for a small fee from most City Halls. Try to ask about the building and see if any other research has been done on the area. If your attempting a ghost hunt in a cemetery, you may also wish to alert police to your presence. Also, be respectful to graves; try to avoid stepping on them or damaging any properties.

Preparation is key to a ghost hunt because getting involved with areas that don’t exhibit the right signs of a haunting can be a waste of valuable time. Also, places with a powerful entity can be very dangerous if ghost hunters aren’t prepared, and someone could get hurt in the process. Ghosts rarely hurt the living, but culture has taught us that the supernatural is something to fear, therefore a common reaction when confronted by the supernatural is to flee. One thing a ghost hunter must do is remain calm and not create any fear or tension in the group. By staying focused and confident, a ghost hunter can concentrate more on capturing evidence and listening to any signs of a presence. Several sources, both psychic and scientific, have recommended imagining yourself surrounded by an impenetrable white light bubble of mental/spiritual energy. While this may sound rather unusual, it is supposed to offer the living protection. This method helps focus the mind, boost confidence, and offers the living a means of defense against the unknown. Also, wearing the right attire can be just as important when going on a hunt. Leave a copy of the address and time of the ghost hunt with a reliable person who is not a part of the group.

Ghost Hunting Kit – Basic items you may want to bring along are a compass, map of area, ghost catcher (wind chime, these have been know to go off when spirits have been present), chalk (to mark locations), wrist watch (with light), cell phone(set to vibrate), first aid kit, tape (sticky/electrical), portable computer, extra batteries (tend to drain during hunts due to ghost related phenomena), laser pointer, flashlight or other light source, and any of the following electronic devices.

EMF Detector – Electromagnetic Field detectors are electronic devices that measure the electromagnetic emissions in the air which ghost hunters believe a ghost can give a high reading of. Getting an accurate reading requires thorough reading of the entire room and awareness of electrical outlets and devices which also give off EMFs. A reading of anything over 2.0 could mean there is paranormal activity present. A TriField detector is a more advanced EMF detector

Infrared Illuminators help infrared cameras to see even more clearly in the dark, by emitting waves of light that only IR cams and night goggles can see; giving cleaner vision.

Video Cameras – Of course you will need a video camera, one of the most important and valuable reasons to go on a ghost hunt is to actually get video evidence of the phenomena. Video cameras can catch the form of a entity sometimes, objects moving, and other paranormal phenomena. Video camera batteries can be drained during investigations which some ghost hunters believe to be the cause a ghost trying to manifest itself.

Camera – Ghost hunters can use cameras for capturing images of spirits, orbs, and other entities because many times, paranormal activity isn’t noticed or seen until a picture is examined.

IR Thermometer – An Infrared Thermometer is used for measuring the surface temperature of an object which a spirit can manifest near or on. A ghost emits a heat signature which the thermometer can detect and there has been evidence of it detecting human-like heat signatures on objects in a room even with no human presence.

Infrared Motion Sensor – This will go off when anything crosses its path, like a IR Thermometer, except these go off when they sense a heat signature pass it. Place at certain parts of the location such as pathways to detect a presence that comes near.

Audio Recorders – Tape or digital recorders can capture EVPs or electronic voice phenomena. Sometimes a ghost will say something that investigators don’t hear until they listen to recordings captured during a hunt. Many creepy voices and sounds have been captured with voices that sometimes don’t seem entirely human.

Dowsing Rods – One of the less common tools that can be used in ghost hunting, these rods can point to a source of energy which may indicate a ghostly presence. Proper use of a dousing rod must be learned before attempting to use since it can provide a way for spirits to enter the body of the user or even stir up evil spirits. Please read up on dowsing before attempting to use or find an experienced dowser. There is much speculation on the effectiveness of these tools and it is considered an unnecessary instrument to have by some.

There are also more high tech equipment out there which can actually translate and enhance through a electronic device what a ghost is actually saying. If you are really interested in ghost hunting, further research and preparation into the various phenomena of hauntings is needed to be completely ready, along with experienced people to go with.