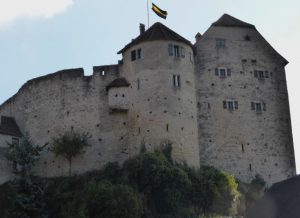 Wolfsegg’s small Bavarian village could be called peaceful and considered a wonderful little getaway for Nuremberg’s nearby citizens, if it weren’t for one very notable landmark. At its center is an 800-year-old castle known as Wolfsegg Castle, which is said to be haunted, and it has an interesting history of course, but it is not where the bones are found, and it is not where the monster can be heard. Welcome to The Hole…

The story of Wolfsegg Castle is a simple one: Klara von Helfenstein and her husband Ulrich von Laaber were the custodians of the castle, which had been built as a way-point for traveling troops. Ulrich, a knight of noble birth was often traveling on ambassadorial missions or on military responsibilities of the real.

It’s said that in his absence his lover Klara took to her bed a local business owner, Georg Moller, who it is also said had a long-standing rivalry with Ulrich. Unfortunately, he learned of his lover’s transgressions while traveling and was unable to return.

Ulrich von Laaber instead hired two young farmers who would be assassins to kill his wife. Moller was a well-respected and wealthy man, and so out of reach of Ulrich’s wrath, but upon hearing of Klara’s death, it’s said that he walked into the woods and vanished. Not much later, Ulrich and his sons would return from their travels, and within the same night that they arrived at Wolfsegg they too would go missing.

The castle itself is open to visitors as a museum, and a number of witnesses have reported the appearance of a “Woman in White”. These are a unique phenomenon that cannot fully be applied to any other category of haunting. They have the ability to move objects and often do so in a violent manner as a poltergeist would do. However, poltergeists are not known to be visible to the human eye and the women in white are.

The oldest known account of a White Woman is a Mexican story about La Llorona (the Sobbing Woman). It’s the story of a woman that loved passionately but was rejected by her love despite baring his children.

When she pressured or cornered her love towards marriage, he murdered the children and fled. She’s been seen walking the country at night for the last few hundred years, her dress covered in blood, crying out for her murdered children.

Almost all stories of the women in white tell this same tale from the Philippines to Belgium.

The castle is a fun tourist attraction in an otherwise sleepy village, if you’re lucky you’ll catch a glimpse of the White Woman, but in the woods behind Wolfsegg Castle is something far worse.

Not more than one hundred yards into the forest there is a cave known by locals as “The Hole” due to its exceptionally steep slope downwards into darkness. For hundreds of years locals have avoided The Hole and the surrounding woods.

There is a strange noise coming from the darkness of the Hole, sometimes just breathing, and sometimes grunts or growling, but the last thing witnesses would describe it as is human.

The locals will tell you that the sounds are not natural of any creature they have ever heard, and they tell the story of travelers that got too close and were never seen again. It’s been this way for eight hundred years, since the night that Georg Moller vanished into those same woods.

Of course, there are numerous folklore creations amongst the European and other cultures to keep their children from wandering too far. This could have been one of them, except that in the early 1920s a scientific expedition was sent into The Hole and what they found terrified even them.

The existing theory amongst the naturalists and geologists present was that the noise was emanating from an animal which was using The Hole as a den. As the entrance was far too steep for any sizeable animal to scale, the assumption was that this particular entrance was just a vent, and that the actual, and probably more accessible entrance was elsewhere.

This was not accurate. The initial opening of The Hole did not split of into a horizontal cave as they had imagined. Instead, it continued downward on its steep angle to the point that it could no longer be considered as exiting anywhere else nearby.

Deep within The Hole they found the tunnel system they had expected much higher up – dozens of small caverns that shot off into the dark recesses below the Earth, then they found their prize. Hundreds upon hundreds of bones scattered the floor of the chambers, some ancient and some fresh.

As it was a tight climb back to the surface only small selections of bones were able to be retrieved. These were analyzed and discovered to be animal bones. That single fact was enough for the team to declare that it was in fact an animal using The Hole as a den, they packed their gear and left, presumably very quickly.

Wolfsegg Castle is not hard to find, it’s the big stone building on the top of the hill in Wolfsegg, but no local will tell you where The Hole is and expect some very worried looks if you say you’re going looking for it.

It’s also important to note that there is a recess at the rear of the castle directly beside the castle walls; portions of this recess are also extending into the castle cellars. As the popularity of The Hole grew, the Kuratorium Burg Wolfsegg, the organization overseeing the grounds began to promote this as The Hole. One look at it and you’ll know it’s not.

A Ghoulish Apparition: The Bizarre Legend of Arizona’s Red Ghost