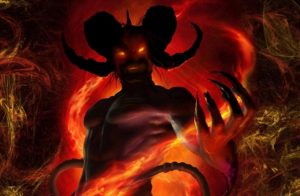 Gerald Mayo, a 22 year old inmate at Western Penitentiary in Pittsburgh, filed a claim before the United States District Court for the Western District of Pennsylvania in which Mayo alleged that “Satan has on numerous occasions caused plaintiff misery and unwarranted threats, against the will of plaintiff, that Satan has placed deliberate obstacles in his path and has caused plaintiff’s downfall” and had therefore “deprived him of his constitutional rights.”

This is prohibited under several sections of the United States Code. Mayo filed in forma pauperis – that is, he asserted that he would not be able to afford the costs associated with his lawsuit and that they therefore should be waived.

While no previous cases had been brought by or against Satan and so no official precedent existed, there was an “unofficial account of a trial in New Hampshire where this defendant filed an action of mortgage foreclosure as plaintiff”, a reference to the short story “The Devil and Daniel Webster”.

Judge Weber suggested that the Devil (who had claimed in that story to be an American), should he appear, might have been therefore estopped from arguing a lack of personal jurisdiction. In this context, the Court noted that Satan was a foreign prince, but did not have occasion to address whether, if sued as a defendant, he would be able to claim sovereign immunity from suit.

Judge Weber also noted that the case was certainly appropriate for class action status, and that Mayo had met three of the four required elements for a class action (commonality, numerosity and typicality), but it was not then clear that Mayo could properly represent the interests of the entire (immense) class (the adequacy element).

Ultimately, though, the Court refused the request to proceed in forma pauperis because the plaintiff had not included written instructions for how the U.S. Marshal could serve process on Satan.