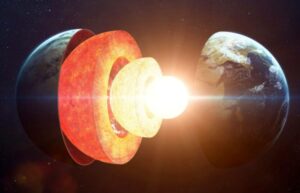 Earth scientists have discovered that the Earth’s solid iron core, which normally spins within a molten outer shell with little to no friction, appears to have slowed to a halt.

“We show surprising observations indicating that the inner core has almost ceased its rotation in the last decade and may have set its sights on another reversal. The cycle takes several decades,” say geophysicists Yi Yang and Xiaodong Song from the University of Beijing.

Scientists have proven that the core is spinning by examining seismic wave readings from repetitive earthquakes, so-called doublets, that passed through the Earth from the South Atlantic to Alaska from 1967 to 1995.

If the inner core were not moving, the shock waves would have to be the same. But it turned out that from the 1960s to the 1990s, seismic waves were getting a fraction of a second faster.

In the new study, these data were compared with newer data from almost identical seismic waves. It turned out that the core slowed down to a complete stop and could even change direction.

Since about 2009, paths that previously exhibited significant temporal variations remained virtually unchanged as seismic waves passed through the core and exited the other side.

According to calculations, a small imbalance of electromagnetic and gravitational forces would be enough to slow down and then reverse the rotation of the inner core, which is observed.

The researchers note that the change in the rotation of the Earth’s core occurs about once every 70 years. This coincides with other periodic changes observed on the surface: in the length of the day and the magnetic field.

Patterns in observations of climate, global average temperature and sea level rise also seem to coincide in a strange way with the rotation of the core.

The new study was published in the journal Nature Geoscience.