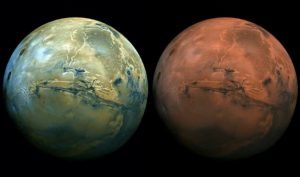 Scientists from Monash University (Australia) found that earlier Mars could be habitable. The research results are published in the scientific journal Geology.

In the course of the study, scientists from Monash University, located in Australia, came to the conclusion that throughout the entire existence of the Red Planet, it has faced large-scale erosion processes.

However, the presence of soil erosion on Mars may indicate that liquid water flowed on its surface.

Researchers have long been trying to unravel the mystery of how the Red Planet from a state similar to Earth turned into a desert.

If humanity wants to know whether there was previously life on Mars, then you first need to carefully study the history of sedimentary rocks, said Andrew Gunn, Ph.D.

He also added that the excessive amount of sand in the craters can be intertwined with the history of the planet’s climate. This opens up a new method to figure out when the Red Planet might be suitable for colonization.