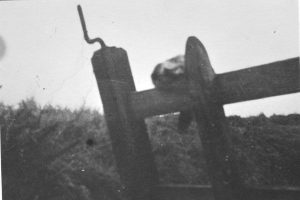 In September 1931, the Irving family, consisting of James, Margaret and a 13-year-old daughter named Voirrey, claimed they heard persistent scratching, rustling, and vocal noises behind their farmhouse’s wooden wall panels that variously resembled a ferret, a dog or a baby.

According to the Irvings, a creature named Gef introduced itself and told them it was a mongoose born in New Delhi, India, in 1852. According to Voirrey, Gef was the size of a small rat with yellowish fur and a large bushy tail.

The Irvings say that Gef communicated to them that he was “an extra extra clever mongoose”, an “Earthbound spirit” and “a ghost in the form of a mongoose” and once said, “I am a freak. I have hands and I have feet, and if you saw me you’d faint, you’d be petrified, mummified, turned into stone or a pillar of salt!”.

The Irvings made various claims about Gef: he supposedly guarded their house and informed them of the approach of guests or any unfamiliar dog. They said that if someone had forgotten to put out the fire at night, Gef would go down and stop the stove. The Irvings claimed Gef would also wake people up when they overslept. And whenever mice got into the house, Gef supposedly assumed the role of the cat, although he preferred to scare them rather than kill them.

The Irvings say they gave Gef biscuits, chocolates and bananas, and food was left for him in a saucer suspended from the ceiling which he took when he thought no one was watching. The Irvings claimed the mongoose regularly accompanied them on trips to the market, but always stayed on the other side of the hedges, chatting incessantly.

The story of Gef became popular in the tabloid press, and many journalists flocked to the Isle to try to catch a glimpse of the creature. Several other people, both locals and visitors, claimed to have heard Gef’s voice, and two claimed to have seen it, however physical evidence was lacking. Footprints, stains on the wall, and hair samples claimed to be evidence of Gef were identified as belonging to the Irvings’ sheepdog, as were several photos which were claimed by the Irvings to depict Gef.

Margaret and Voirrey Irving left the home in 1945 after the death of James Irving. They reportedly had to sell the farm at a loss because it had the reputation of being haunted. In 1946, Leslie Graham, the farmer who had bought their farm, claimed in the press that he had shot and killed Gef. The body displayed by Graham was, however, black and white and much larger than the famous mongoose and Voirrey Irving was certain that it was not Gef. She died in 2005. In an interview published late in life, she maintained that Gef was not her creation.

In July 1935 the editor of The Listener, Richard S. Lambert (known as “Rex”), and his friend, paranormal investigator Harry Price, went to the Isle of Man to investigate the case and produced the book The Haunting of Cashen’s Gap (1936). They avoided saying that they believed the story but were careful to report it objectively. The book reports how a hair from the alleged mongoose was sent to Julian Huxley, who then sent it to naturalist F. Martin Duncan, who identified it as a dog hair. Price suspected the hair belonged to the Irvings’ sheepdog, Mona.

Price asked Reginald Pocock of the Natural History Museum to evaluate pawprints allegedly made by Gef in plasticene together with an impression of his supposed tooth marks. Pocock could not match them to any known animal, though he conceded that one of them might have been “conceivably made by a dog”. He did state that none of the markings had been made by a mongoose. The diaries of James Irving, along with reports about the case, are in Harry Price’s archives in the Senate House Library, University of London.

Price visited the Irvings and observed double walls of wooden panelling covering the interior rooms of the old stone farmhouse which featured considerable interior air space between stone and wood walls that “makes the whole house one great speaking-tube, with walls like soundingboards.

By speaking into one of the many apertures in the panels, it should be possible to convey the voice to various parts of the house.” According to Richard Wiseman “Price and Lambert were less than enthusiastic about the case, concluding that only the most credulous of individuals would be impressed with the evidence for Gef.”

Nandor Fodor, Research Officer for the International Institute for Psychical Research stayed at the Irvings’ house for a week without seeing or hearing Gef. Fodor did not believe deliberate deception had occurred and moulded a complex psychological theory to explain Gef based on “a split-off part” of Jim Irving’s personality.

Ancient Philosophy: The Microcosm and the Macrocosm