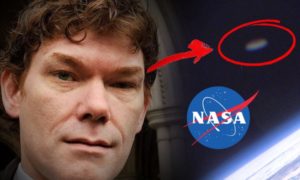 High-profile hacker Gary McKinnon claims to have some interesting information about the US Navy’s intergalactic adventures.

Gary McKinnon is a British lifelong UFO fanatic and computer expert, whose 2002 arrest for hacking into the US Navy and NASA systems was labeled the ‘biggest military computer hack of all time.’

McKinnon claimed the security was so lax, he didn’t expect to get caught. He used a program called Landsearch to scan documents and files to look for UFO cover-ups, and he did so undetected for two years before the game was up. McKinnon then faced a ten-year legal battle in the UK, only narrowly avoiding extradition to the USA.

He has spoken before about exactly what he discovered during that time, but never in as much depth as in this interview with RichPlanet TV.

– In Building 8 at Johnson Space Center, there is someone whose job is only to airbrush UFOs from images, since they are so commonly captured.

– He found a US Navy spreadsheet entitled ‘Non-terrestrial officers’. McKinnon admits these words “can be interpreted in various ways,” but one thing is for sure: given the name, we know they’re not based on Earth.

– McKinnon says there were maybe 25 rows on the excel spreadsheet with officers’ ranks and names, and that the ships had the prefix ‘USS’, just like American sea vessels.

– He claims of evidence of “material transfer between ships”, of which he guesses there are “possibly eight to ten.”

– McKinnon says all of this points to evidence that the USA has war ships in space, which might account for why the Bush administration were so keen to have him incarcerated in the States.

In parts 2, 3 and 4 (which follow the video below on YouTube), McKinnon expands on the information shared in this first part (and gives his reasons for not believing in the moon landings, amongst other things).

Many might be quick to label McKinnon a quack or a liar, but in this interview his body language doesn’t suggest he’s making anything up: in fact, during the course of the four-part interview, his story is surprisingly consistent.

What do you think of Mckinnon’s claims? Please comment below and share this video if you found it interesting.