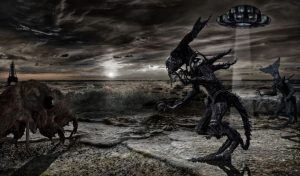 Humans are the only intelligent and self-aware beings on Earth. However, many experts believe that the development of intelligent machines can lead to dramatic changes.

According to James Lovelock, a British futurologist, cyborgs will build their own world, and humanity may disappear from our planet, reports nbcnews.com.

According to Lovelock, author of the new book Novacene, self-sufficient and self-aware cyborgs will be descendants of modern robots and artificial intelligence systems.

The Briton predicts a new era in which the Earth will be governed by machines.

James Lovelock looks at this problem from the point of view of biology – today’s computers can already process data much faster than us, and future machines will be even better and become millions of times smarter than humans.

Ultimately, cyborgs will surpass us intellectually and create their own world in which man will be reduced to a subordinate role and perhaps even redundant.

James Lovelock believes that cyborgs can transform the Earth to be friendlier to them. However, it is not known whether the new world will still be friendly to people.

Lovelock imagines cyborgs filling every evolutionary niche on the planet. “I think of cyborgs as another kingdom of life,” he says. “They will stand to us in much the same way as we ourselves, as a kingdom of animals, stand to plants.”

What would cyborgs look like? Lovelock is intentionally vague because he expects that they’ll rethink the basic rules of design in ways that we puny humans cannot imagine.

“Cyborgs would start again; like Alpha Zero they would start from a blank slate,” he writes in his book. He speculates that they might look like spheres, though when pressed he says, “It’s entirely possible they would have no form at all,” existing mostly as virtual forms inside computers.

It is also not known how our human civilization will end – whether it will be weak and will not adapt to changes, or it will simply be destroyed by machines.

The British futurologist predicts that the advent of the cyborg age will be the last stage of life on Earth, which could take a billion years.

When conditions on Earth are not favorable for the survival of synthetic life, machines will migrate and populate another planet.