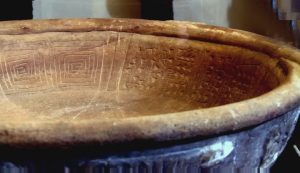 The Fuente Magna is one of the most intriguing and controversial archaeological finds to come out of the South American region. Often referred to as the “Rosetta Stone of the Americas”, the Fuente Magna is a large stone bowl that is believed to have been used for some type of ceremonial or ritualistic purpose, such as purifications, baptisms or libations.

It was accidentally discovered in Bolivia in 1960 by a peasant farmer who was working on a large property known as the Chua Hacienda, a private estate owned by the Manjon family located roughly 50 miles from La Paz (near Lake Titicaca).

The site where the bowl was found had not been excavated or previously studied for artifacts, but thermoluminescence dating has confirmed that the Fuenta Magna is of ancient origin.

The bowl itself is an earthen-brown color, and it is intricately engraved with several zoomorphic or anthropomorphic symbols and motifs. The interior of the object is adorned with engravings that appear to be an ancient proto-Sumerian cuneiform script, but there is considerable debate over exactly what language it represents.

Other sections of the bowl feature inscriptions that are written in the ancient quellca language that many researchers believe originated with the Andean Pukara culture, a precursor to the storied Tiwanaku civilization.

In 1960, a Bolivian archaeologist by the name of Max Portugal Zamora learned of the bowl’s existence by way of his friend Pastor Manjon. After performing some minor restoration work on the artifact, Zamora attempted to decipher the cryptic engravings on the bowl, consulting with several texts and guides on ancient Andean writing.

Unfortunately, his efforts were largely fruitless, and later that year the bowl was transferred to the La Paz City Hall in exchange for a land grant to the Manjon family.

The Fuente Magna was then placed in the city’s “Museo de Metales Preciosos” (Museum of Precious Metals) for roughly 40 years before a renewed interest in the artifact brought it back to the forefront of archaeological inquiry. 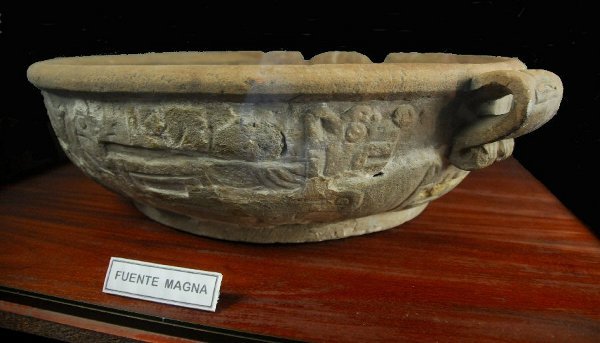 In the year 2000, Bolivian archaeologists Freddy Arce and Bernardo Biados decided to visit the place of the Fuente Magna’s discovery, traveling to Chua in order to interview the local residents and search for any clues as to the strange bowl’s origins.

Information was initially hard to come by, leading the two researchers to several dead ends; no one seemed to have any knowledge of the Fuente Magna or the Manjon family. Not too long afterward, their fortune changed when they encountered a 98-year-old native farmer named Maximiliano.

Upon seeing a photograph of the Fuente Magna, Maximiliano recognized it as one of his former possessions, calling it “el plato del chanco” (Spanish for “the plate of the hog” or “the hog’s dish”). As it turned out, the Fuente Magna, one of the most important archaeological finds of the 20th century, was used by Maximiliano as a feeding container for the pigs!

Maximiliano went on to tell Arce and Biados that he did not regard the bowl as important until a man came and (possibly after paying a sum of money) took it away, and later handed it over to the local La Paz municipal authorities.

Arce and Biados took numerous photos of the artifact and carefully studied it, concluding that it was more than likely used in ancient times to perform certain rituals or ceremonies. They subsequently sent the results of their research to a renowned American epigraphist named Clyde Ahmed Winters.

After thoroughly studying the photographs, Winters concluded that the mysterious inscriptions found in the Fuente Magna were written in a proto-Sumerian language. Below is Winters’ translation of the cuneiform characters on the central panel of the bowl:

“Use this talisman (the Fuente Magna bowl) to divine or bring forth wisdom, serenity and unique advice at the temple. Anoint this righteous shrine; the leader will take an oath to take the right path to establish purity and character. Oh [priest or cult leader], look for (or open up) a unique light for all of those who desire to live a noble life.”

According to ancient Sumerian legends, Nia (also referred to as Ni-ash or Nammu) was the goddess who gave birth to the heavens and the earth. The frog depicted on the inside of the bowl–and which is the central figure of the bowl–is commonly known among researchers to symbolize fertility, and is a representation of the Sumerian goddess Nia. The exterior of the bowl features two zoomorphic images that are commonly found within ancient Tiwanaku symbology–the frog and the snake.

The question then becomes this: How did a bowl containing proto-Sumerian inscriptions wind up in an area near Lake Titicaca, which is 12,500 feet above sea level, and thousands of miles away from the area that the Sumerians used to occupy?

Research indicates that the Sumerians were a maritime culture, and that they had managed to navigate the Parana River in order to reach the ancient Peabiru Road, from which they were able to access the Andes area in roughly 3000 B.C. It was from there that they mingled and traded with the Pukara people, exchanging items including copper, gold, fabrics, and pottery.

The history of many of the ancient civilizations is still very unclear, and the exact manner in which these different cultures may have intermingled is still the subject of much speculation.

Discoveries such as the Fuente Magna, though they are rare, can significantly move us towards a better understanding of how to piece together the many different mysterious facets of ancient human history.