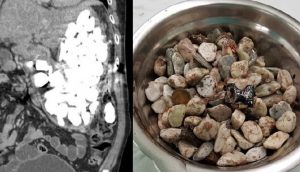 The unnamed 54-year-old South Korean swallowed a lot of stones, wine corks and coins weighing 2 kg. After that, his stomach swelled and severe pain began.

When the man went to the doctors, they immediately noticed his greatly enlarged abdomen, but they did not know what caused this, because the patient did not mention the swallowed foreign bodies.

Only after X-rays, which showed that the entire intestine of the Korean was clogged with solid round objects, he admitted to the deed.

He also said that he has long been experiencing a similar situation on the basis of nerves when he pulls in his mouth and swallows various small objects. Doctors even prescribed him soothing pills, but for some reason they did not work.

It later turned out that the patient was suffering from a congenital disability due to his mental state.

Surgeons first tried to remove foreign objects from his body through gastroscopy – that is, through a thin tube inserted through the mouth. But it failed. In the first place, there were too many items, and secondly, they penetrated too far into the intestines. 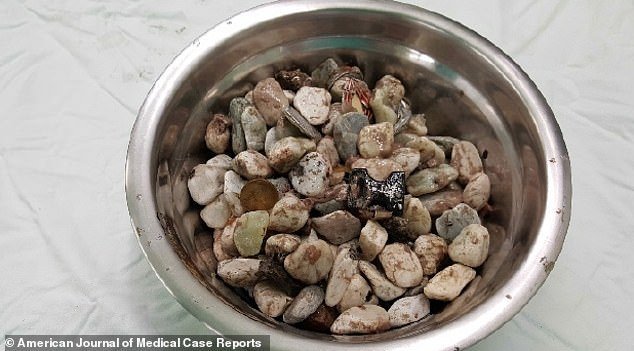 Then there were thoughts to do endoscopy through the rectum, but the idea was also immediately abandoned because of too many items.

The next day he underwent abdominal surgery, during which about 2 kilograms of various coins, traffic jams and pebbles were extracted.