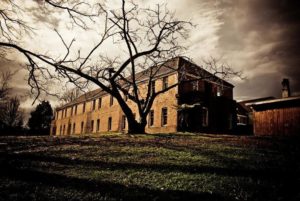 Kingseat Hospital is located just south of Auckland (New Zealand) at Karaka and is a former psychiatric hospital that is considered to be one of New Zealand’s notorious haunted locations with over one hundred claims of apparitions being reported.

It was operational from around 1930 to 1999 when it finally closed its doors and the location was proposed as a site for a new prison that would hold 600 people but that did not go ahead. In 2005 the old hospital once again had a lease of life and became Spookers a haunted attraction in the former nurses home and in 2011 opened a maize maze on the hospital grounds.

Kingseat Hospital was named after a hospital in Aberdeenshire, Scotland, following the Director-General of the Mental Health Division of the Health Department (Dr. George Gray) upon returning from an overseas trip and he felt it appropriate to have a sister hospital with the same name in New Zealand.

Flower gardens, shrubs and trees were grown in the grounds of Kingseat Hospital such as surplus plants from the Ellerslie Racecourse and Norfolk Island pines originally seeds from Sir George Grey’s garden on Kawau Island.

The actual construction of the hospital is said to have started in 1929 when 20 inmates from another nearby mental institution brought 12 wheelbarrows and about 10 shovels to the hospital site. Kingseat Hospital was in operation since 1932.

In 1939, the Public Works Department and Fletcher Construction Company Ltd agreed on the construction of a two-storey nurses home at Kingseat Hospital, with the government to provide the steel for the building. The hospital grew throughout the mid-late 1930s and 1940s to such an extent that by the beginning of 1947, there were over eight hundred patients.

From 1964, nursing staff at Kingseat were given name tags to wear on their uniforms. In 1968, certain nurses at Kingseat Hospital went on strike, which forced the administration to invite unemployed people and volunteers to assist within the hospital grounds with domestic chores.

In 1973, a therapeutic pool was opened by the then-Mayoress of Auckland, Mrs. Barbara Goodman, four years before the main swimming pool was added to the hospital in 1977. The site celebrated its 50th anniversary jubilee in 1982.

During the 1970s and 1980s, there were many places attached to psychiatric hospitals in New Zealand where alcoholics were treated for their drinking addictions and Villas 4 and 11 at Kingseat Hospital served this purpose.

In 1996, South Auckland Health sold Kingseat Hospital after government decisions to replace ongoing hospitalisation of mentally ill patients with community care and rehabilitation units. This led to the eventual closure of Kingseat Hospital in July 1999, when the final patients were re-located off the complex to a mental health unit in Otara.

After the closure of Kingseat Hospital in 1999, the grounds were initially considered as a potential site for a new prison, able to accommodate for six hundred inmates. In 2000, legal action was taken against the Tainui tribe for financial issues involving the former hospital.

It has also been reported that at least two patients had vanished whilst at the hospital and little is known about what happened to these people. As of 2007, the most common apparition reportedly seen at Kingseat Hospital was the “Grey Nurse”, believed to be a former staff member, in and around the former nurses’ home.

In 2011, ideas were proposed to grow the area in the Kingseat suburb tenfold for the area’s equine industry. This involved propositions of rezoning to residential a majority of the land around Kingseat Hospital although certain buildings, structures and plant life on the former hospital site were protected due to historic and cultural value.

Since the hospitals closure more than 200 people have come forward to file complaints against the government, claiming they were mistreated in New Zealand’s psychiatric institutions during the 1960s and 1970s including patients at Kingseat Hospital.

Many of the complainants, who at the time of the incidents were aged between 8 and 16 years old, said that they were heavily over-medicated, unwillingly subjected to electro-shock treatment, and placed in isolation for long periods of time — sometimes for months.

With numerous amounts of legal complaints and cases being filed the government has expressed an interest in resolving all of the reported complaints of abuse or mistreatment against these poor patients.

We can start to see how the buildings of the hospital could hold such dark energies and have claims of paranormal within, the ones who complained are the lucky ones, the claims of the amount who passed away within the walls on Kingseat is in the high side.

According to stuff.co.nz, Kingseat Hospital is the number one haunted spot in New Zealand. The problem with these claims, is that apart from A New Zealand TV show called Ghost Hunt, no real paranormal investigation groups have or may ever be able to investigate the hospital.

Until such an investigation takes place we just have to take the words of those who made the TV show and of those who once worked and lived behind the wall and razor wire that is Kingseat hospital.

It is said that one of the reasons that no real paranormal investigations take place is due to the court cases of mistreatment going through the courts, that along with the sale of the place, the new owner did not want the idea the place was haunted to get out there.