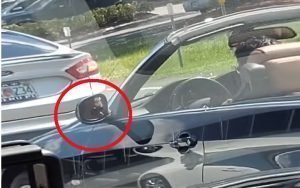 Recently, a video with a strange “matrix glitch” filmed on a road somewhere in the USA was uploaded to the Tik Tok video service.

A driver named Victor Cruz, standing in front of a traffic light, noticed something unusual when he looked at a convertible in the right lane.

According to Cruz, it reminded him of a “glitch in the Matrix,” when he realized that the movements of the driver’s head in a convertible were completely out of sync with his reflection in the side mirror.

The author of the video aloud voices his bewilderment, saying, “Look, his face is moving, but not in the mirror! The picture is broken!”

Real-life “glitch in the matrix”?