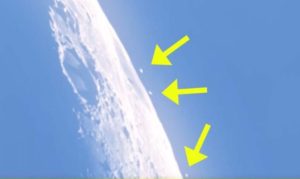 On March 26, an amateur astronomer captured on video in Montréal, Canada, three strange objects passing at high speed in front of the Moon when he was filming the surface of the Moon.

In his images, which were recently published by Jean-Michel Tenac on his YouTube account, you can see how these objects appear flying over the Moon, and that they seem to be flying at a great height, that they carry a relatively fast speed and that they have the same trajectory.

In the description that accompanied his video, Jean-Michel Tenac said:

“This video is not mine. A friend passed it to me. Filmed in Montreal in the late afternoon. He tells me: I regularly film the Moon by day, at the time of the first and last crescent”.

“I think that if a hidden activity is going to be visible on the Moon, it is at this time, when the population does not observe it, because it is daytime and the first or last crescent makes it more discreet in the sky”.