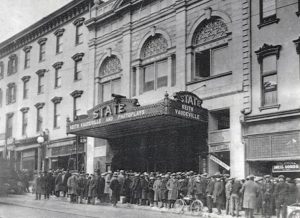 Fred Osterstock was the manager of the State Theatre for over 30 years. He loved it so much, he hasn’t left. His ghost has been seen and his presence, felt.

The building was originally Northampton National Bank and built in 1873. The financial institution facility was reconstructed as Neumeyer Theatre in 1910 and served as a vaudeville house.

After several name changes, it became the State Theater in 1926. Vaudeville was dying and talking movies were popular, so a larger screen and new electronic equipment were added.

In the 1970s, the theater was used mostly for rock concerts. The State closed in 1980 and was nearly demolished. In 1986 and 1990, the facility underwent major renovations upgrading the systems and furnishings.

Today, the theater is luxurious and reminiscent of a gentler, more opulent and elegant era. Nationally known performers and plays are featured.

The State Theatre began to host its annual Freddy Awards in 2003. These recognize noteworthy accomplishments in High school musicals’ productions and performances. Broadway’s Tony Awards inspired the yearly ceremonies. These awards are named for its resident ghost, J. Fred Osterstock.

The Man and His Ghost

Fred was the manager of the theater from 1936 to 1965. The distinguished-looking man was a dedicated hard worker.

Due to a flood in 1955 that covered the first floor of his house for several weeks, Fred lived at the State Theatre, setting up home in the office located to the right of the foyer. Fred returned to live at the State during his last year of tenure as manager.

Fred Osterstock died on October 20, 1957 and is buried in Easton Cemetery, but his spirit continues to live on at the State Theatre.

Convinced that his presence has never left, the staff of the State Theatre has named the ghost FRED. Numerous sightings have been reported, with some of the voyeurs being members of the State’s Board of Directors.

Maintenance workers would catch a glimpse of man at the back of the theatre, standing or walking into a utility closet, when the building was empty. They called the police who found no one else in the building.

Police dogs were brought in one time. The fur bristled on their necks, although the officers saw nothing.

Not everyone has seen Fred. Some people reported just feeling his presence or being brushed by something.

One volunteer said he felt Fred’s presence and also had a weird experience. He was alone in the lobby and he saw a circle of light about an inch in diameter.

He tried to block the source of light with his hand, but wasn’t able to do so. He cupped his hand over it to try to grab it, but the light moved slowly across the floor, up a wall, then vanished.

People who have seen Fred’s apparition have been members of the Board of Directors, employees, volunteers and theatergoers.

Ken Klabunde, 54, theater manager from 1973 to 1980, said he first saw Fred during his first year as manager. He was checking to see if the lights were on under the balcony when he glimpsed a man leaving the stage.

After relaying his story to an old projectionist, the man showed him a picture of Fred and it matched.