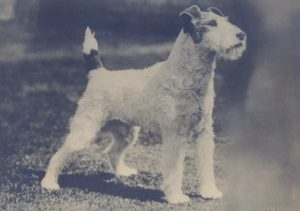 Anpsi is animal parapsychology, which has been researched scientifically. Facts: Animals can predict deaths of loved ones. They can also be ghosts.

This intriguing case involves these two paranormal phenomena. Dog Foxy knew Jake was dying and reacted to this. After his own death, Foxy appeared as a ghost.

In the late 1800s, “Jake” Jacobs ventured to the Indian Territory to find a new home. The Civil War veteran had been wounded in his chest. It didn’t heal. His doctors told him to seek a different climate.

Mr. Matthews heard his dogs bark and went to see who was stopping by. He saw a man on a horse with a fox terrier sitting behind the rider. Jake introduced himself, then asked if he could give him a place to stay that night. Matthews agreed.

The next morning, Jake told Matthews he wanted to look around the countryside. He asked Matthews if he could stay for a few days, adding he would pay for his lodging. This was agreed to.

When Jake returned, he told Matthews he saw an abandoned shack and asked if he could live there. Jake and Foxy had a home.

In November, Jake went on his daily ride, accompanied by Foxy. An icy rain began to fall. He returned at twilight, shivering, and asked Matthews if he could spend the night there.

The man gave him dry clothes, then went to fetch the doctor. By the time they got to the house, Jake’s condition deteriorated. Diagnosis: double pneumonia. Jake wouldn’t recover. He went into a coma around 2 PM. Foxy knew something was wrong.

At the moment Jake died, Foxy ran to the door, begging to be left out. He ran to the shack and howled and cried. Once Jake was buried, Foxy lay on the grave and refused to move.

Although Matthews gave him food and water and built a shelter for him, within weeks, the dog died. Matthews buried him beside Jake.

This man also sought shelter in the Matthews’ home. During dinner, Jacques said he was looking for work. Matthews said Mr. Brady was looking for a farmhand. He had recently hired three men, but all quickly left.

The next day, Jacques went to Brady farm and was hired. He worked all day, ate with the Bradys, then returned to the Matthews’ home after dark. One night, Jacques saw a fox terrier. As he passed the dog, it jumped onto the back of his horse.

He tried to hit it with his quirt. The crop went through the dog. He tried to push the animal off of the horse, but only felt air. He urged his horse to a gallop, hoping to throw the dog off.

When they reached the old shack, the dog vanished. This continued. Jacques told no one. He began to look forward to seeing Foxy’s ghost.

Four months later, the Matthews invited the Bradys and Jacques for dinner. The conversation turned into one about ghosts. Brady asked Jacques if a fox terrier had ridden with him.

The reply was he had. Brady asked him why he hadn’t avoided the dog. Jacques said that, once he realized Foxy was a ghost, he wasn’t afraid of him.